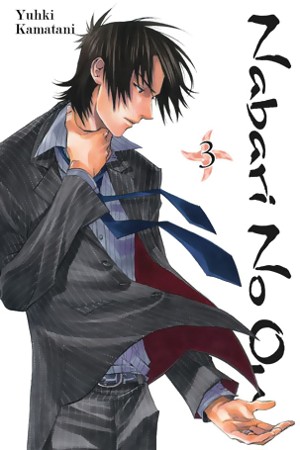 After making his deal with Miharu, young Yoite returns to the Grey Wolves with philosophical matters on his mind. Meanwhile, the Togakushi Village ninja (who maintain a front as an employment agency) approach the Banten to offer their forbidden art scroll in exchange for the assassination of a prominent scientist. Though the Banten are inclined to refuse, the Togakushi leader’s talent for mind-reading forces them to accept the job.

Volume two may have begun slowly, but this one does not follow suit. Tension is high with everyone’s secrets on the line, including several that remain a mystery even to readers. The most damning, of course, is Kumohira’s, the revelation of which would likely set Miharu against the Banten forever. Not that that Miharu is clearly with the Banten in the first place. Though he’s expressed the desire to protect his friends, in this volume he also teases Kumohira with the hint that he may decide to use the Secret Art rather than banish it–a possibility Kumohira seems to take seriously for the first time.

This volume’s major event–the assassination plot–is its least interesting element, overwhelmed by the growing collection of small psychological dramas surrounding it. Almost nobody is telling the real truth to anyone else, a reality made crystal clear by the fact that Miharu and Yoite, who are ultimately working for opposite sides, are behaving more honestly with each other than any of the story’s official allies.

This is not to suggest that the scenes involving the assassination are lacking. It is, in fact, during these scenes that some of the most intriguing action occurs, including Koichi’s ninjitsu presentation at a student physics event. With this increasingly layered approach, volume three is easily the most mature of the series so far, though it comes at a cost. As the story becomes more complex, it also loses some of its focus. For the moment, this is a good thing. Right now, the scattered feel of the series reflects the scattered loyalties of its characters, which is actually pretty powerful. It takes very little, however, for a deliberate lack of focus to morph into a Great Big Mess, something Kamatani will hopefully avoid. Additionally, the series’ humor–originally one of its strongest points–is noticeably reduced in this volume.

One small production note: Yen appears to have made a switch in paper for this volume, moving to a slightly thinner, less bright stock. Though I only noticed the change once I had volumes two and three sitting side-by-side, more vigilant print geeks than I are bound to catch on faster.

Minute paper issues aside, Nabari No Ou continues to intrigue, with a deliciously suspenseful ending sure to keep fans on edge as we await the next volume.