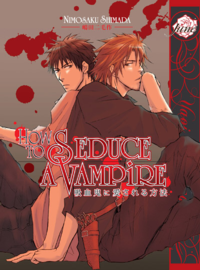 Watanabe is a young man living off a part-time job, who just happens to be descended from a legendary demon hunter. Mizuo is a good-looking, nocturnal hairdresser, who just happens to be a vampire. Throw the two together and you get… love? As hackneyed as this premise may sound, its execution is good-humored and surprisingly entertaining, thanks to an unlikely combination of outrageous cliché and good writing.

Mangaka Nimosaku Shimada takes nothing too seriously. From ridiculous boys’ love conventions (What can a vampire drink in lieu of blood? Semen, of course!) to the characters’ hobbies (one of Mizuo’s old vampire friends is an action figure otaku), everything in this story is plainly lighthearted and frequently played for laughs.

On the other hand, Shimada takes the time to develop each of the manga’s primary characters, giving each of them extensive backstory and genuine motivation, without falling into the cloying sentimentality that pervades most modern vampire tales. Shimada’s vampires are neither pathetically heroic or viciously monstrous, nor are they particularly romanticized despite their appearance in a romance manga. Unfortunately, some of the story’s most promising bits of plot seem woefully unfinished, as though the actual run of the manga failed to live up to the scope of the author’s ideas.

The story’s art is unremarkable but adequate, with the only major caveat being that it is wildly over-toned. Readability is never a problem, however.

For those weary of the glut of vampire romance stories cropping up everywhere these days, How To Seduce a Vampire provides a surprising oasis in an endless sea of affected teen angst.