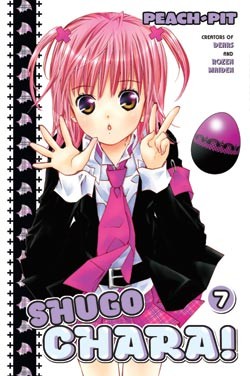 As this volume opens, Nadeshiko’s twin, Nagihiko, enrolls in Seiyo Elementary with a big secret he feels unable to share with Amu. Ikuto escapes from Easter with his violin, but a mysterious illness brings him to Amu’s doorstep in a wholly unexpected fashion. With Ikuto hiding out in Amu’s bedroom, Tadase chooses an unfortunate time to confess his feelings (one that comes back to haunt him shortly after) and Amu learns a hard lesson about the consequences of underestimating the people who trust her most.

This is a fairly heavy volume in this deceptively light-hearted series, with both Amu and Nagihiko caught in lies they can’t find their way out of, and Amu’s relationships with Tadase and Ikuto becoming muddier all the time. After all, it’s really two love confessions she receives in this volume, even if Ikuto’s must be necessarily masked by humor while he waits for her to “Hurry up and grow up.” Whether it’s creepy for a seventeen-year-old to be in love with a twelve-year-old is a dicy question, certainly. Considering the book’s intended readership I’m inclined to chalk it up to pre-teen fantasy, which mainly leaves me wishing I’d had something like this to read when I was twelve.

The best moment in this volume, however, is between Amu and her mother. After being caught sneaking out of the bathroom with a freshly-showered Ikuto, Amu’s mom sits her down for a talk about trust, but not the one readers might expect. Instead, she expresses her disappointment in Amu for not trusting her parents enough to tell them about what was going on with Ikuto so that they could help work out a suitable solution (presumably one less likely to compromise their daughter’s virtue). This scene is both touching and timely, since it gives Amu the information she needs to understand what happens next with Tadase.

Another striking scene in this volume takes place between Amu and Ikuto’s sister, Utau, who chastises Amu for being too much of a child to understand the importance of power in the world. “Kids who have no power like us or weak people like my mother will be crushed by a larger power and no one will notice … That’s why I wanted power. Lots of power so we won’t get crushed.”

This is not an unusual speech to hear from a manga character with a troubled childhood. What’s special about it in this series, however, is that despite its shiny sugar coating, Shugo Chara! does not come down clearly on either side of the argument. The series portrays Amu’s environment amongst adults who truly can be trusted right alongside Utau’s dog-eat-dog world, fully embracing the contradiction and unfairness of life in a way that feels unexpected in this kind of story. Similarly, though the story consistently demonstrates the power of people working together, it doesn’t attempt to pretend that this can heal all wounds. Utau comes to Amu, not because she thinks Amu is filled with sparkly goodness that makes everything all right, but because Amu has power and she wants her to use it.

My favorite character here, however, is Nagihiko. Though I don’t wish to spoil, I must mention how much I appreciate the way Peach-Pit has taken shojo gender-bending clichés and made them into something real rather than just playing them for laughs. “Amu-chan wants to see Nadeshiko, not me,” Nagihiko says, dreading the appearance of the person he most wants to see. His story is fantastic and well-written from the beginning, and I wish there were more like it.

With Easter’s latest plot quickly coming to a head, the next few volumes will certainly be action-packed. Fortunately, that action will be built on the strong foundation laid by this tense, emotionally rich volume. Enjoy!

Check out my review of Shugo Chara! Vol. 8 in tomorrow’s Manga Minis at PopCultureShock!