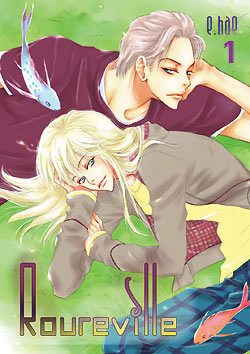 Though Roureville is not without flaw, it is in many ways a perfect example of what makes up a truly compelling boy’s love story. Complete in three volumes, Roureville is first and foremost a mystery. Though Evan’s growing relationship with his troubled young host clearly provides the heart of the story, it is the mystery of the people of Roureville driving the plot forward, just as thoughtfully and thoroughly as it would without any romance at all. This is what makes a romantic story resonate most, regardless of the gender or sexuality of its characters–something that is tragically overlooked in an overwhelming majority of the boys’ love stories I’ve read to date. By providing a strong external context for the story’s primary relationships, readers get to know the characters (as they get to know each other) out of bed first, which is, for my money, where people reveal who they really are. Providing real context for the romance in a story gives it much more dimension than it could possibly develop on its own, even over three volumes. On the strength of this alone, I would recommend Roureville. Luckily it has even more to offer.

One of the story’s main points of focus is Evan’s guilt over the people whose lives he has destroyed as a side-effect of his work, particularly innocents caught in the crossfire. With the quiet life of Roureville providing little distraction with which to muffle his own thoughts, Evan is pulled further and further into himself, increasingly aware of the blood on his hands. Meanwhile, Jayce has traumatized himself (to the point of altering his own state of being–the story’s one supernatural element, which integrates surprisingly well into an otherwise reality-based universe) over his perceived contribution to others’ misfortune, beginning with his mother’s death in childbirth. This mutual sense of guilt draws the characters together in a wholly believable manner (something one can’t take for granted in boys’ love), creating a situation in which Evan can learn to take responsibility for his actions and Jayce can learn to let go of responsibility that is not his. Whether a strong bond like this between two supposedly straight men is believable as a precursor to romance (something one can take for granted in boys’ love) is another matter entirely but it works fairly well here, despite the resulting lack of gay identity between them.

The story’s mystery–that of the origins of the town and its citizens–is both its greatest strength and its greatest weakness. While the framework it provides for the romantic plot is a key element behind the series’ success, the series’ scant three volumes is not nearly enough to allow it to be fully developed, leaving plenty of holes in both plot and characterization. Most of the story’s secondary characters represent opportunity lost as the chapters rush by, failing to make the most of what would make up an extremely compelling cast over the course of a longer series. Though not a single character is written as one-dimensional–not even Evan’s rejected fiancée (another nice deviation from usual boys’ love clichés)–much potential is left tragically untapped. The great care taken with the two main characters keeps things well intact, making this overall weakness an acceptable one, but when the required substance is so obviously there, it’s hard not to wish for more. That said, the series’ final volume is particularly strong, fleshing out the journey of its main characters beautifully, even within such limited space.

Hae’s writing is vivid and wonderfully visual, even in description, complementing the series’ stylized artwork extraordinarily well. “The self-realization came to me suddenly, like a car accident,” Evan says to himself at one point in the story, planting an image as strong as if it had actually been drawn. This quality helps to make up for where the series becomes overly wordy which, to be fair, is never true of the dialogue itself but rather description and inner monologue. The visual storytelling is strong overall, but there are occasionally so many boxes and bubbles hanging over a panel, it’s difficult to follow the thread.

On a personal note, I continue to enjoy NETCOMICS’ selection of Korean boys’ love stories, not only for what they uniformly provide (strong plots, thoughtful characterization, and engaging romance) but for what they don’t, particularly the twisted bedroom dynamics present in so much of the Japanese boys’ love manga I’ve seen published in English. Roureville is no exception to this and perhaps deserves special appreciation for the fact that its most passive character turns out to be especially aggressive in bed.

Ultimately, despite its weaknesses, Roureville‘s plotty composition and compelling romance make it one of the most enjoyable boys’ love series I have read this year. In a year like this one, that’s saying quite a lot.

Roureville is available in its entirety at NETCOMICS.com. Complimentary access was provided by the publisher.