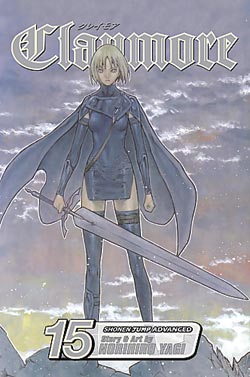 Volume fifteen opens with the conclusion to the battle with awakened warrior “Bloody Agetha”—a battle that will soon seem utterly insignificant in comparison to what comes afterward. As the fight ends, the rebel warriors finally reveal their true intentions to Galatea, Clarice, and Miata, after which Miria goes on to divulge what she’s discovered over her many years investigating the Organization, including its origins and true purpose. The truth she’s uncovered is genuinely shocking and as the rebels (along with their new allies) prepare for what may be their final battle, Clare embarks on a side mission of her own to reunite with Raki, the boy she left behind so many years before.

This volume’s new revelations are really quite stunning, pulling the story further into darkness and creating a deeper atmosphere of pathos around both the young women whose futures were sacrificed to make warriors and all the the citizens whose villages have long been plagued by Yoma. It’s difficult to discuss any of it without ruining one of the story’s best plot twists so far, but suffice it to say that the new information is a game-changer all around, giving the series a significant boost of momentum. Adding to this fresh strength is the reemergence of Raki, now a powerful young man, still traveling with Awakened One Priscilla who has become smaller (if not weaker) thanks to several years’ abstinence from eating human flesh.

Those who have followed Claymore to this point have already reaped many of the rewards of Norihiro Yago’s slow and steady approach. Both its plot and characterization have become significantly more complex over the course of the series. Volume fifteen moves all of this yet another great step forward, transforming this series into a real must-read for fans of dark fantasy.