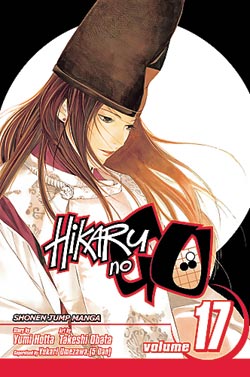 Warning: This review contains spoilers for volumes fifteen and above.

At the end of volume sixteen, having reluctantly agreed to a game with Isumi, Hikaru finally found Sai in the most obvious place of all: his own game. This volume opens with Hikaru tearfully facing that truth as well as the realization that the best way for him to honor Sai is to continue to play Go. With this new determination, Hikaru confronts Akira after a match (one that has raised Akira into the Hon’inbo League) to inform him of his return. Fortunately, a match between the two of them is already on the schedule, one which they both anticipate eagerly.

Meanwhile, higher-ups in the Go Association, the upper echelon of pros, and members of the press dedicated to the game are all getting excited about the “new wave” of powerful young players rising up in the ranks, viewing it as both a personal call to arms (in the case of the pros) and a much-needed potential for revival of the game in Japan. As Hikaru and Akira finally face each other over the goban for the first time in over two years, rumors of their rivalry re-emerge among the other players, feeding this new excitement.

After volume sixteen’s shift in focus, it is exciting to be back in Hikaru’s thrall once more. Having recovered his true energy, he pulls the story along at full speed, so much so that it almost feels like Akira must come after him rather than the other way around. It is a real pleasure to see these characters on track together again–their rivalry rendered nearly poetic by the likes of Hon’inbo title holder Kuwabara, who sees Hikaru and Akira as equally gifted geniuses, dependent on each other in their quest for the “divine move.”

What’s especially refreshing about the writing in this series, however, is that even though this rivalry is heralded as something divine in nature, it does not diminish the importance of the story’s many supporting characters, each with his/her own batch of worries and rivalries–not even the students back in the Haze Junior High Go Club–but instead portrays each of them as a vital part of the living, breathing entity that is Japan’s Go. There is such warmth in each chapter as writer Yumi Hotta takes the time to linger over each of the characters’ personal stakes, great or small, and it is this feeling that allows this story to be intensely dramatic and completely down-to-earth, both at the same time.

This volume has a fantastic energy throughout, but the real drama emerges in the penultimate chapter, in which Akira admits to Hikaru that he sees another person inside him, only to be further shocked when Hikaru all but admits it. This leads beautifully into a dream sequence for Hikaru that easily brought me to tears.

Though my consistent recommendation of this series may appear excessive, it has evolved at this point into such a wonderfully crafted story, it’s very difficult to find fault. From its increasingly moving plot to its consistently fantastic artwork, the true elegance of Hikaru no Go continues to impress me with each new volume.