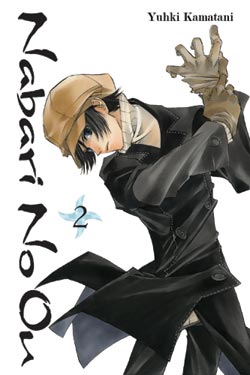 In the aftermath of the first volume’s attack by the enemy clan Grey Wolves, Miharu and his companions recover in care of the Fuuma, many of whom were lost in the conflict. With the Banten shinobi having no official leader, Kotarou Fuuma, leader of his clan, assumes control and assigns teacher Kumohira and his young charges to retrieve (or steal, if necessary) the forbidden arts belonging to each of the other remaining clans. Though revelations about the motives and methods of the Fuuma leave Miharu even less sure of who to trust, he eventually finds himself feeling some sense of responsibility and even friendship towards would-be samurai Ramei and classmate Koichi. This volume’s major drama, however, is left for its final chapter, in which Miharu is offered alliance by an extremely unlikely source.

After the suspense and high action of this series’ first volume, the second begins slowly, churning out additional exposition without quite enough momentum to sustain it. Fortunately, this volume’s final chapter is thrilling enough to make up for early shortcomings, bringing real tension back into the story as well as highlighting the complexity and pathos behind Miharu’s carefully practiced apathy.

This volume takes pains to deepen the backstories for much of the series’ supporting cast, though most of these characters remain weak in comparison to the story’s most compelling characters–Miharu and deadly human weapon Yoite. Both of these characters possess potentially lethal abilities that endanger their own lives in one way or another, and it is fascinating and sad to witness the blatant sense of entitlement their respective shinobi clans appear to feel regarding their powers. That the clans have gravely overestimated their ability to control these two boys seems obvious, but it is yet unclear just how dearly this miscalculation might cost them or the boys themselves.

Though pacing is a weakness in this volume, even the least urgent chapters succeed in terms of dramatic content, thanks to Kamatani’s frequent use of close-ups and full-page images which give just the right weight to exactly the right moments. That a sense of stillness would be one of the greatest strengths of a manga that is ostensibly intended as an action series may sound a bit strange, but that is absolutely the case here. This quality plays a great part in creating the dark, moody atmosphere of the series, which remains one of my favorite aspects of it overall.

With its complex anti-hero and melancholy feel, Nabari No Ou‘s second volume ultimately overcomes its somewhat uninspired early chapters to maintain its position as my favorite new shonen series so far this year.