I’ve made quite a few manhwa-heavy posts in the past six months or so, starting with Let’s Talk About Manhwa, in which I declared my love for Korean BL comics and asked for recommendations for all kinds of manhwa. The comments to that post were fantastic–filled with recommendations upon recommendations, only a fraction of which I’ve managed to get to at this point. I’m reading as fast as I can!

The truth is, I’ve really fallen in love with manhwa. It has many of the traits I most love in Japanese manga–lots of epic, dramatic, character-driven, single-creator stories with lovely art and well-paced, finite plots–but each these traits has its own particular quality unique to manhwa. I believe that even if I was presented with flipped manhwa (reading right-to-left like Japanese comics) I would be able to tell at a glance that it was made in Korea–something that has been proven to me already, actually, in the case of one of my favorite single-volume Korean BL stories, U Don’t Know Me. Some of this has to do with the art, particularly the character designs which favor a a particular kind of cheek and chin, full lips and heavily lined eyes, but the storytelling has its own flavor too, with its spunky, outspoken (often even violent) girls and arrogant, swaggering boys.

These traits may be particular to girls’ manhwa, I realize, since that makes up the vast majority of what I’ve read (the one exception perhaps being JinHo Ko’s Jack Frost) but I can say without reservation that I am head over heals for girls’ manhwa. What puzzles me is… why isn’t everyone else? Sure, manhwa has its fans, as my early post proved to me quickly. But overall, I see a lot less attention being paid to manhwa releases than manga releases, even among faithful readers of shojo manga (who would seem to me to be the perfect audience) and certainly among readers of this blog. A review of a new manhwa series typically draws less than half the number of readers as a review of a new manga series, in my experience so far.

To help raise those numbers a bit, I’d like to take a moment to recommend a few currently running manhwa series. I talked about a few just recently when I made recommendations for Right Stuf’s NETCOMICS sale, so I’ll devote myself today to manhwa from Yen Press. Here are a few series currently in publication I’ve been enjoying greatly: 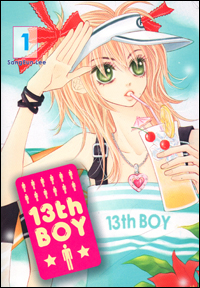 13th Boy, the story of a girl and her talking cactus (really). Okay, really the story is about her quest for destined true love, romantic rivalries, friendship, and magic, but the talking cactus is very dear to my heart. Though its first volume leaves a bit too much hanging to be genuinely coherent, this story really blossoms in its second volume, rendering it a must-read. From my recent review of volume two:

What was charming but incoherent in the first volume of this unusual supernatural romance has become simply charming in its second volume now that the story has apparently hit its stride. Without losing any of the elements that made the first volume so perfectly whimsical (strange teenagers, hints of magic, talking plant life), the relationships between the characters are finally taking shape, though much mystery still remains… With its nuanced relationships, idiosyncratic characters, supernatural themes, quirky art, and sense of true whimsy, 13th Boy is a real winner with me.

This manhwa seems like a true hidden gem to me and I strongly suggest that fans of quirky, supernatural shojo manga give it a try. 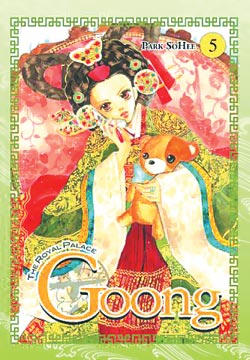 Goong, the story of a teen girl in an alternate present day monarchy-ruled Korea, who finds herself (unhappily) promised in marriage to the country’s crown prince. This is a story that has captivated me completely. From my review of volume six:

If the two previous paragraphs are not proof enough of how caught up in this series I’ve become, I’ll offer more. Though I found this volume intensely frustrating on an emotional level, I’ve paused several times while writing this review just to reread large sections of the book–not because it was necessary for the review but because that’s how easily it is able to lure me right back in…

I’m an emotionally-driven reader, which often leads me to gloss over visual details as I rush through from one heart-wrenching moment to another, gobbling up the story like the delicious confection it is. The art in this series, however, makes me want to take my time poring over each panel. These two impulses battling each other all through the volume is probably more humorous than anything else, but I think it also is a great illustration of just how enthralling this series can be on both visual and emotional levels.

I love Goong. It’s that simple.

One Thousand and One Nights, a retelling of the original stories in which Scheherazade is male, and easily my favorite of current BL-esque series I am following. These remarks made in a rambling post-review entry about volume seven say it all:

Sehara’s quiet devotion, Shahryar’s intense fire, the painfully dramatic ending of this volume which I will not give away–oh, it is almost more romance than I can bear, though I’d fight anyone who tried to take it away from me. This is the kind of story that I read for in the first place, and it is a pleasure to be reminded of it once again. I have no idea how this story is going to end, and more and more it seems nearly impossible to avoid real tragedy. For a character with as much blood on his hands as Shahyrar has, can there be a happy ending? Perhaps, but it is tough to write that ending without the happiness feeling unearned. I guess we shall see. I have a lot of faith in these storytellers, and they have yet to let me down in any significant way.

There are other series I’m reading now that I could say are better comics, and certainly some I love more if I was pressed to choose. But there is something truly special about this series–a timeless, romantic, otherworldly quality that is different than anything else I’m reading and satisfying in a way that is truly all its own.

This is a series I’ve raved about plenty, so please, read and buy.

Sugarholic, a story I’ve only just begun but is already poised to be a winner. Telling the story of a country girl forced to make her way in the big city, this manhwa has made a great start. From my review of volume one:

From the very beginning of its first volume, Sugarholic is the perfect example of the girls’ manhwa formula at work. A plucky, outspoken heroine is thrust into unfamiliar territory with a couple of good-looking but complicated guys, at least one of whom she initially despises. At least two other manhwa series I’m currently reading (both Goong and Comic spring immediately to mind) have roughly the same setup, for the most part. Thing is, despite the formula, each one of them is wholly engaging and a lot of fun, and Sugarholic is no exception… Ultimately, the best recommendation I can give for Sugarholic is that when I finished this volume, I immediately wanted to read the next.

Like a lot of girls’ manhwa, Sugarholic is just a little bit trashy in the very best way. 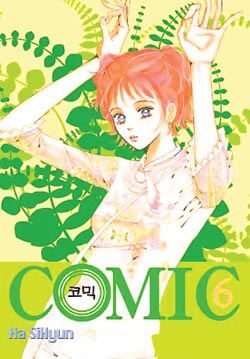 Speaking of “a little bit trashy,” Comic, the story of a teenage girl who aspires to be an manhwa artist. Now, I’ve had my ups and downs with this series, particularly since it seems to have abandoned its original premise entirely in order to become just another girls’ high school manhwa, but it’s a really compelling girls’ high school manhwa, so I still can’t give it up. From my review of volume seven:

I may have issues with this series, but I can’t stop reading it. That has to mean something.

These are not all of Yen Press’ great manhwa series–not even close! It is, however, a little cross-section of my current favorites. If you’re a shojo manga fan and you have yet to fall for manhwa, I heartily recommend taking a look at one or more of these series.