Tale of the Waning Moon, Vol. 1
By Hyouta Fujiyama
Published by Yen Press 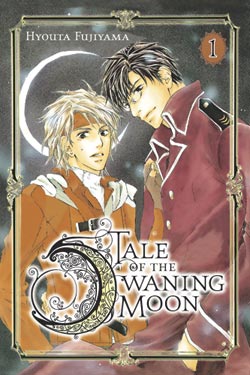 After his faithless girlfriend leaves him for a rich man from the next town over, poor Ryuka heads to the tavern to booze it up, followed by a drunken trek to a spot known as the “Wishing Hill,” where he makes a wish for “someone… anyone” to help him forget the girl–someone to love him and to be loved in return. What he wishes for soon after is to have chosen his words more carefully, for though help appears in the form of Ixto, spirit of the last quarter moon, the only options Ixto offers him as potential lovers are other men, something Ryuka is definitely not interested in. His proposals rejected, Ixto takes on the responsibility himself, making (questionably consensual) love to Ryuka all night long.

Thanks to Ixto’s magical powers, Ryuka awakens the next morning to find his body annoyingly drawn to the memory of Ixto, sending him on a spellbound, RPG-style journey to who knows where. To protect him, Ixto provides a guide of sorts–a scantily clad “moon cat” (complete with ears, tail, and go-go shorts) named Coon, who is said to be “honest and obedient.” Coon, unfortunately, is also an easily swayed nymphomaniac who steers Ryuka into trouble more often than not. As the volume continues, Ryuka and Coon are joined by more travel companions, mainly a traveling nobleman and his unusually (*cough*) beloved horse, and Ryuka is forced to recognize the fact that he has begun to develop real feelings for Ixto.

On a very basic level, Tale of the Waning Moon would appear to be Not My Kind of Yaoi. It is utterly unrealistic, essentially plotless, outrageously fluffy, (weirdly non-explicit) smut. It is also breezy, good-humored, occasionally satirical, and genuinely funny, which is ultimately what makes it at least readable, if not exactly profound. There is absolutely no denying the fact that the main purpose of the series is to get as many pretty men in bed together as possible with a secondary view towards having fun while doing so. Though the characters are attractive and undeniably amusing (Ryuka may be the only character in my personal history with manga to have made me chuckle over discussion of rape), it is a sad state of affairs when the most compelling romance is between a man and his horse. On the other hand, successfully satirizing both yaoi cliches and role-playing games at the same time, as Hyouta Fujiyama does here, deserves a nod of true admiration.

Ryuka and Ixto play the standard uke and seme roles with a mildly sarcastic edge–Ryuka struggling prettily and eventually succumbing to Ixto’s ravishment, though he repeatedly refers to him as a “rapist” throughout the volume. Meanwhile, Ryuka accumulates his sexually charged traveling party, leading them through towns and inns where they face various romantic and sexual foes. Admittedly, I can’t help but anticipate the next volume on the chance that they might make the traditional stop at a store for supplies. Just think of the supplies, after all.

The series’ art is far from extraordinary and the RPG aspects of the story could potentially be more fun if the journey’s locations were rendered with greater care. Still, character designs are the soul of fanservice and that’s clearly the priority here. The visual storytelling is energetic and coherent, though hard core yaoi fans may be disappointed with the lack of panel space devoted to sex scenes.

Though it is impossible for me to recommend Tale of the Waning Moon to fans outside the genre and it is very far removed from my own tastes within the genre, I can’t deny the fact that this volume was able to consistently make me laugh–something not even a gag manga is always able guarantee. If fun, fluffy, satirical yaoi is your bag, Tale of the Waning Moon may well be the series for you.