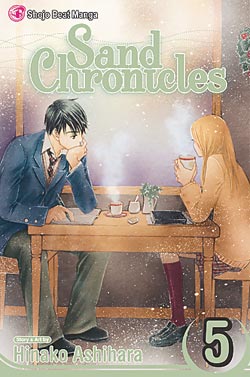 After promising to call once he’s sorted out his feelings, Daigo has gone three months without contacting Ann and each passing day makes it more difficult for him to pick up the phone. Ann tries to be patient but is dying inside, saved finally by her friend Asa who places a call to Daigo on her behalf. Determined to be the one to put in the work this time, Ann rushes to the airport and flies back to see him. Meanwhile, Shika has been going all out to try to attract Daigo for herself, though she meets repeated rejection. Finally faced with Ann’s presence (and her own betrayal), Shika’s desperation leads to desperate action and though ultimately some things do end up going her way, the outcome is far from what she might have hoped.

As rare as it is for first love to last forever, particularly in ones so young, it’s still painful to watch such an intense relationship wane, especially when both characters are so likable and so obviously still in love. Though Ann’s considerable emotional baggage and Daigo’s hero complex make their relationship potentially damaging for them both, their mutual devotion is hard to beat and very difficult to give up easily as a reader. “No, no!” I found myself crying throughout much of this volume, despite the fact that both characters have equally appealing admirers waiting patiently (or not) in the wings.

One of the most powerful characteristics of this series, of course, is its nuanced treatment of love and friendship, and this volume provides an perfect example of that trait, if not in quite the way one might expect. Though the mangaka’s handling of Ann’s relationships with both Daigo and rival Fuji are as poignant and wonderfully layered as always, the most interesting interaction in this volume is between Ann and Shika. Alternately defiant and conflicted over her decision to steal her best friend’s boyfriend, Shika never loses either the love or jealousy she feels for Ann, and as a result, ties them both up in knots. The fact that this volume nowhere contains (or even remotely approaches) any kind of stereotypical cat fight or other confrontation between the two of them keeps the story’s melancholy feel perfectly intact, while also demonstrating the power of the characters’ long mutual history. Even while hurting each other, these characters are connected too deeply to relish the results or even to just be okay with them. This kind of thoughtful writing is perhaps what I treasure most in shojo manga and is certainly what draws me to this series.

Also in this volume, both Ann and Daigo face decisions about their careers–a common theme in high school manga–presented here with the same delicate anxiety that permeates the series overall. Both of their personal struggles here are highly engaging, as Daigo fights off snickers from friends and family when he sheepishly announces his intention to get into a well-respected public university and Ann fights her own complacency when she realizes she’s never developed any ambition at all beyond her desire to go back home and marry Daigo. This plot line only enhances the sense that the two of them may be growing irrevocably apart, as new love interests are the ones best poised to help each of them move forward.

Though this series’ art lacks the extraordinary poignance of something like We Were There–a series with a similarly melancholy feel–it is visually well-paced and nicely expressive with occasional moments of stillness and beauty that can be truly breathtaking. Body language, in particular, is one of the artist’s real strengths, which is a great asset to her already-rich characterization.

For those of us who prefer our shojo manga heavily weighted in sweet, sweet angst, choosing Sand Chronicles is no-brainer and its fifth volume could not possibly embody this aesthetic more. Bring some tissues and dig right in!