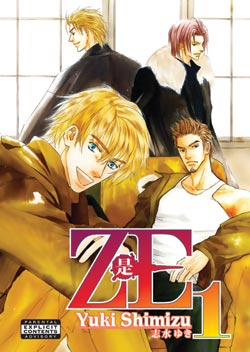 Ze, Volumes 1-2
By Yuki Shimizu
Published by 801 Media
Buy these

Left on his own after the death of his grandmother, Raizou Shichikawa, a student at the local culinary school, is brought to work as a live-in cook and housekeeper for the Mitou family–a wealthy household with a very strange secret. Initially shocked by the inhabitants’ overt sexual behavior towards one another, Raizou quickly discovers that the household is made up of two types of people: “kotodama-sama,” who are born with the ability to use kotodama (the power of words), mainly to deliver curses for hire, and “kami-sama” who are actually not people at all, but instead human-like dolls made of paper who exist to absorb the injuries sustained by their masters each time they perform a curse. The injuries may be transferred from kotodama-sama to kami-sama either by using kotodama or through contact with the “mucus membranes.” In other words, the injuries are transferred primarily by sexual contact. Additionally, the kotodama/kami pairings must all be homosexual.

With a premise that could easily be pretext for pure pornography, what makes Ze something more is the poignant story of Kon, Raizou’s roommate at the Mitou home, who is a kami-sama with no kotodama-sama. Left without reason for existence, a kami-sama with no master will most often lose his or her identity completely and revert into “blank paper,” to be used again one day in the creation of a new kami-sama. Kon has been kept alive in this world by hiring himself out to heal the injuries of normal humans–primarily mobster-types who deal in the curse business and who think nothing of leaving him covered in wounds in order to save themselves–though he feels deeply his lack of true purpose. Moved by Kon’s circumstances (and with his own sexual awakening accelerated by this new, sexually-charged environment), Raizou develops feelings for Kon and, after extracting him from a particularly degrading and violent situation, impulsively suggests that he become Kon’s kotodama-sama, despite his lack of supernatural abilities.

As the story continues into its second volume, Kon and Raizou explore what it means to love someone and, to a great extent, what it means to be alive. Raizou’s insistence that there is no need for “purpose” in life beyond being with those you love (something he’s felt keenly since the loss of his grandmother) is in direct conflict with everything Kon knows about being kami-sama, which is an ongoing issue between the two of them. Meanwhile, the stories of other kotodama-kami pairs in the household are touched upon as well, particularly that of Shoui–a kotodama-sama so deeply in love with his kami-sama, Asari, that he refuses to transfer his injuries to him, despite Asari’s frantic horror over not being able to heal him. 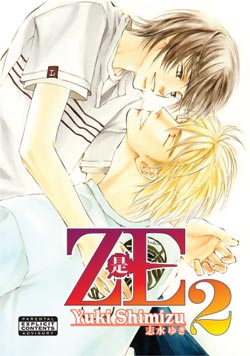 Despite Kon and Raizou’s touching story, this series, with its explicit sexual content and far-fetched premise, is obviously meant more for the purpose of titillation than for its emotional or philosophical content. Still, the result is somewhat the best of both worlds–providing ample sexual fantasy alongside wistful characterization and food for thought. Though the relationships could be better-developed (Raizou and Kon, for instance, fall for each other a bit too quickly, without establishing the kind of real, personal connection that might have elevated their story above the usual standards of the genre), their emotional intimacy is very compelling, and the mangaka brings a very warm kind of fun into the relationships by way of her often humorous bedroom scenes.

Also, it is refreshing to see a same-sex female relationship in the mix alongside the usual yaoi pairings, though the fact that one of the female characters is drawn so carefully to resemble a male (and is never shown without full clothing, despite her partner’s frequent nudity) does cheapen it a bit by making one suspect that this is done to cater to the tastes of its heterosexual female readership. Regardless, there is at least a little bit of fan service for everyone in this series, which makes all of it a bit more palatable somehow.

That the series is intended largely as pornography does not preclude examination of its more complicated themes, for those who wish to go there. The story offers a great deal to ponder in terms of the moral implications of creating near-humans (made of paper or anything else) obviously capable of feeling emotion and both physical pleasure and pain, for the purpose of serving other humans, sexually or otherwise. Even Raizou’s feelings and actions bear some scrutiny here. Though he seems to genuinely love Kon, what does it mean to love someone who was created only to serve? Can Kon learn to love him freely and fully by his own will? Has he already? What role does Kon’s creator, head of the Mitou household, play in the relationship between Kon and Raizou? What happens when Raizou finishes culinary school? Would Kon be “allowed” to live a life outside the world he was created for? Is living only to be with someone else really enough?

Shimizu’s art is quite attractive and serves her story well. The backgrounds and layouts have the typical sparseness associated with the genre, though there is more character detail and clarity in the storytelling than is often seen. Though the physicality of the characters preserves most elements of the seme/uke pairing, the story’s sex scenes are nicely balanced and thankfully free of the uke’s usual grimaces and frantic protests.

With its mix of pure fantasy and thoughtful romance, Ze is able to appeal to both hard-core fans and casual readers of yaoi alike. As a decided member of that second group, it’s nice to be able to say that I am looking forward to the series’ next volume!