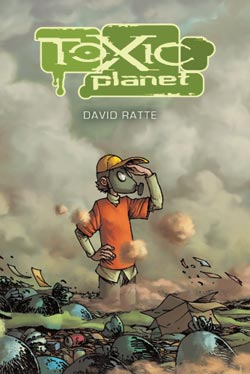 Sam’s world is one created by industry and global warming, where vegetation is ancient legend and gas masks are a daily necessity. Both the earth and its atmosphere are irrevocably poisoned, ecologists are considered enemies of the state, and trees are seen only in museum exhibits. Yet somehow, all this is funny. Really, really funny. Released by Yen Press first as a webcomic and now in print, French cartoonist David Ratte’s satirical comic transforms environmentalism into the sublime by mixing harshly real messages with sharp, occasionally whimsical humor.

Sam and his wife, Daphne, are the main focus of the series, though we are also introduced to Sam’s work colleague, Tran, “Grandma” (it’s unclear whose), Sam’s estranged ecologist parents and their young daughter (the unfortunately named “Orchidea”), and a flock of penguins escaping the melted north, among others. Though the storytelling style is closer to an episodic newspaper strip than a graphic novel, it is the comic’s recurring threads that are the funniest, such as the “flower power” activist group (which hits Sam closer to home than he expects) and Orchidea’s obsession with convincing her teacher to allow their class to adopt a penguin. There is not a single page of this volume, however, that is not hilariously funny. Whether the subject is oil slicks, ozone depletion, or Sam’s “subversive lung” (a lung containing a single clean spot, unlike the solid black lungs of his coworkers), Toxic Planet delivers the laugh with impressive consistency.

Though the humor is definitely biting at times and its messages are pointed, Ratte’s whimsical style prevents things from becoming heavy-handed. The book does, however, serve as a sharp reminder of the US government’s recent irresponsibility regarding global environmental issues, for though the government official portrayed in the Toxic Planet is president of “The Global United States,” certain similarities are undeniable. In fact, the only element of the book that makes its European origins obvious (aside from a few French signs and names) is the occasional discussion of genetically modified food, something that has caused great friction between the US and the EU over the years.

As a manga reviewer, it’s rare that I read or review something in full color but I’m grateful this has been published as such, because it is the colors that really bring to life the murky, sickening world of Toxic Planet. Shrouded constantly in clouds of chemical pollution, even inside people’s homes, Ratte’s world is horrifyingly fascinating in its filthiness. What is most stunning, however, are the occasional glimpses of true green, providing the contrast needed to bring the comic’s messages home. Also impressive is how effectively Ratte is able to give expression to a book full of characters who never remove their gas masks. Without faces, the artist would seem to be facing an insurmountable handicap, but Ratte’s characters are fully rendered regardless of this obstacle, with no less expression (and perhaps quite a bit more) than your average comic strip characters.

I admit I’m curious how this property ended up as part of the Yen Press catalogue, but perhaps I should not be surprised. Yen has branched out further than most manga publishers, bringing over more Korean comics than anyone (with the exception of NETCOMICS), publishing global/OEL manga like Svetlana Chmakova’s Nightschool and Judith Park’s Dystopia, and putting out more Japanese 4-koma comics (similar to western comic strips) than I’ve seen coming from anywhere else. Perhaps global, non-manga-styled comics are the natural next step for Yen. Whatever the reason, it’s lucky for all of us that they’ve decided to take a chance on a Toxic Planet and I can only hope there will be more of it.

Toxic Planet will be available in August, 2009. Check it out online here! Review copy provided by the publisher