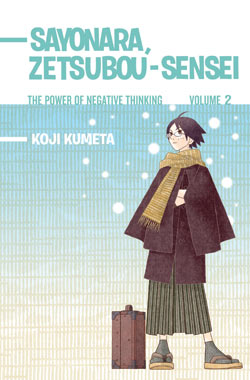 Unflinchingly bleak schoolteacher Nozomu Itoshiki and his students are back, beginning with a chapter set during Tanabata in which Itoshiki-sensei’s wish (“I want to resign”) stands in contrast to the actions of overly-optimistic Kafuka who hangs people’s college applications on the bamboo tree and convinces the masses that their wishes can be granted in their next lives. This chapter opens the volume well, re-introducing the characters effectively before moving on. This volume also features a visit from a man posing as Commodore Perry (the man who famously “opened” Japan), a tirade against information, the tragedy of overshadowed achievers, Comiket, a beach where everyone is perilously on edge, the Itoshiki family’s unusual marriage traditions, so-called “criticism training,” and an ode to instability, all presented with the same sharp, fast-paced satire as the series’ first volume.

The success of this volume once again mainly comes down to personal taste and sense of humor. If the first volume did not make you laugh, this one will not either, but if it did, you’re in for another treat. Though the numerous Japanese cultural references may actually be even more dense in this volume, Joyce Aurino’s adaptation still reads quite smoothly and I maintain my original recommendation against following her meticulous translation notes during the first read.

It is the thick layers of humor that strike me most in this series. Not only are each chapter’s main gags wonderfully funny and over-the-top, but the tiny details–small, throw-away jokes nearly lost in the din with their barely legible font sizes–are often so funny I have to stop reading to let myself get in a good, long laugh. Like the first volume, this book gets funnier with multiple rereads–another reason why catching each reference the first time around is honestly unnecessary. Unlike a lot of shonen manga which is consumed so quickly it leaves you just as hungry as when you began, this series is best ingested slowly, chewed carefully several times over for the most satisfying meal.

Simultaneously breezy and dark, volume two of Sayonara, Zetsubou-Sensei is just as grimly delightful as it can be.