Kimi ni Todoke: From Me to You, Vol. 1
By Karuho Shiina
Published by Viz Media 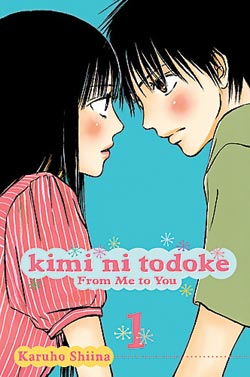 Sawako Kuronuma is a quiet, socially awkward girl with an unfortunate physical resemblance to “Sadako” from Ringu–enough so that her classmates call her by that name, either out of cruelty or (in many cases), ignorance. Though rumors persist that she sees ghosts, summons spirits, and places curses on those who are foolish enough to look her in the eye for more than three seconds, Sawako is actually an earnest, exceptionally kind girl who always volunteers to do the work nobody else wants to do and whose most heartfelt dreams involve helping her classmates understand their schoolwork. The only student in school who shows Sawako kindness is, inexplicably (to her), a popular boy named Kazehaya. He smiles at her and calls her by her real name–treating her no differently than anyone else, something for which Sawako is consistently grateful. What Sawako doesn’t realize is that to Kazehaya she is much different from everyone else, in a way she is honestly unable to fathom.

Romance between impossibly clueless teenagers is hardly new to shojo manga, but there is something so charming about this story and its characters that it manages to feel fresh all the same. Sawako’s innocence might easily be trying but it is so sincere and so intertwined with genuine weirdness, it is impossible not to love her. The same can be said for Kazehaya, whose earnest appreciation for Sawako (“For some reason, people always apologize to me,” Sawako narrates over the scene of their first meeting, “but he smiled and said, ‘Thank you.'”) makes him one of the most adorable and honestly likable shojo love interests I’ve ever encountered.

One of the things that is most well-done is the portrayal of Sawako’s attempts to connect with other students. As she becomes more friendly with Kazehaya, he encourages her to reach out and talk to people, and she does, with mixed results. Sometimes the students are receptive and sometimes it is just easier for them to stick to their old prejudices and fears, which is very true to real life. Some of them also walk that very fine line between friendliness and pity, which is a harsh reminder of how nuanced and even cruel the concept of kindness can be. For most of them, including two girls who follow Kazehaya’s lead and begin to reach out to Sawaka early on, that line is blurry and uncertain, and it’s hard to know (even for them, probably) where they really stand. Unfortunately, Sawako lacks the kind of perception needed to recognize or truly understand these particular social nuances, so it is likely she will be blindsided should things turn ugly , which, based on events near the end of this volume, they very soon may.

The real wild card here, however, is Kazehaya. What’s fantastic about him all through this volume is that he is utterly unaffected by what any of the other students think. He pursues Sawako earnestly and cheerfully, though she remains honestly clueless about his feelings for her. It remains to be seen, however, what he might do if the students actually began to turn against him for doing so, particularly his real friends. His consistently cheerful demeanor makes it difficult to know what kind of boy he really is and it seems likely he’s going to be put to the test, and soon. I look forward to seeing what happens here and I can’t help but fervently hope that he comes through for Sawako, whether that serves the story best or not.

Karuho Shiina’s art is quite effective and it’s a pleasure to note that she never makes Sawako either unbelievably pretty or unbelievably plain, while still giving her a nicely distinctive character. The other character designs are much less distinctive, at least in this volume, but there is a lot of expression and honesty in the art that helps the storytelling remain emotionally evocative throughout. Also, though Kazehaya’s design is very much Standard Manga Schoolboy, he’s got a smile that truly lights up the page. Viz’s edition of this volume includes a small page of stickers in the front of the book, showcasing the artist’s chibi designs.

At the end of its first volume, Kimi ni Todoke is poised to move in any of several directions, as it explores the excruciating nuances of teen politics alongside sweetly innocent romance. I, for one, can’t wait to find out where it goes.

Volume one of Kimi ni Kodoke: From Me to You will be available on August 4th, 2009. Review copy provided by the publisher.