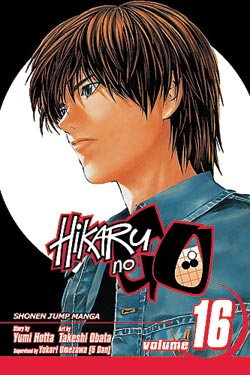 After volume fifteen‘s intense drama, this volume begins with relative lightness as Isumi heads to China with a group of pros to play a few friendship games at the Chinese Go Association. After a couple of devastating losses, Isumi decides to stay a few extra days in order to get a rematch with the young pro who first defeated him, but at the urging of a friendly Chinese pro, a few days becomes two months. Meanwhile, the Japanese pro world is stunned by Hikaru’s growing string of forfeits as he remains determined not to play in hopes that Sai might one day return. Though Hikaru refuses anyone who asks him to play, the one request he is unable to turn down is from Isumi who, having returned to Japan, feels that he must play a clean game with Hikaru before he will be able to face the upcoming pro test.

Though this volume lacks the strong emotional impact of the previous volume it is, like the rest of this series, 191 pages of pure joy, carefully plotted to pack exactly the right punch at the end. This series remains fresh and oddly elegant–truly one of a kind in its genre.

Volume sixteen of Hikaru no Go will be available on August 4th, 2009. Review copy provided by the publisher.