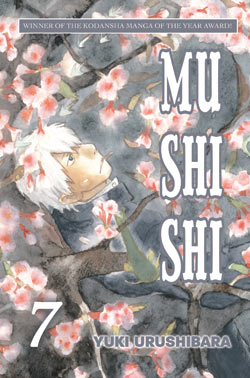 The seventh volume Yuki Urushibara’s quiet, supernatural series strikes a particularly sinister tone as nearly all its stories expose the ugliest aspects of humanity. First, “Lost in Blossoms” involves a family who has been keeping one woman alive for hundreds of years by feeding her on a sap-like mushi and grafting her head onto younger bodies whenever hers is about to die. “At the Foot of Lightning” studies a mother who is utterly unable to love her own child or even care that he exists. “The Ragged Road,” told in two parts, delves into the darkest secrets of the Minai family–the most ancient line of mushishi–and what they are willing to do to themselves (and each other) in order to maintain their calling. Only the second story, “The Mirror in the Muck,” displays any kind of real hope for humanity, as its heartbroken heroine makes the choice to live on, even in pain, instead of allowing a mushi to steal her existence. Though these tales are almost uniformly bleak, the series remains no less beautiful or mysterious than it has from the beginning.

This brings to mind one of the eternal conflicts of Mushishi–namely the question of whether or not it is essentially moral for the mushishi to consistently favor and preserve human life over the lives of mushi. Certainly one of the most compelling aspects of the series is watching Ginko struggle with this question and observing the many instances in which he tries (and often fails) to avoid having to address it by finding ways to preserve both. I’ve long pondered this question on my own, unsure if humanity was morally bound to use its supposed power of conscience when engaged in a struggle for survival against the mushi, whose actions are motivated purely by instinct. This volume doesn’t really change anything, except to make it even more clear that there is not nearly as much difference between mushi and humans as we’d probably like to think, and that though we may be able to triumph based on strength, we certainly can’t claim any moral superiority.

Please bear in mind that this is not a complaint. The philosophical complexity of the world presented in Mushishi is one of the best things about the series and this volume only accentuates that. Though the mushi create an enticing framework, the real story here is Ginko’s personal journey and nowhere is this more clear than in this volume. Though in previous volumes it is his loneliness that has often dominated the story’s emotional palette, here it is something deeper. Though it is true that Ginko’s affinity for mushi makes him a danger to other humans (and unable to live among them), this is not true the source of his isolation. Ginko’s real tragedy is that it is humans who seem truly alien, more often than he could ever be comfortable with.

Though “The Ragged Road” is quite brutal, it also offers one of the volumes highlight’s–the return of Tanyu, one of the few characters in the series Ginko allows himself to maintain a real attachment to. Though she appears only briefly quite near the end, the warmth of her presence lightens both Ginko’s mood and the reader’s mind, leaving things on an unexpected high note.

As always, William Flanagan’s translation notes at the end of the volume are a must-read, not because the story is at all difficult to understand without them (it’s not), but because they are just fantastically interesting. Yuki Urishibara’s omake pages, both in the middle and the end of the book, are worth the time as well, telling tiny, mysterious stories of their own. It’s enjoyable to read her cheerful notes at the end, too–such a contrast from the darkness of the volume as a whole.

For those who have yet to dig in to this series, though its episodic nature allows entry at really any time, I’d recommend picking up at least the first two volumes to provide a solid understanding of what’s to come. More to the point, however, I recommend Mushishi fully and completely and this volume is no exception.