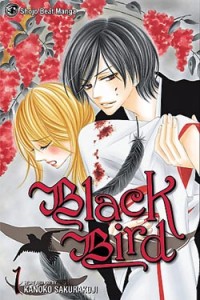 Misao Harada has been able to see demons and spirits all her life, though they are invisible to everyone else. As she’s gotten older, they seem to follow her more and more, making her daily existence difficult to tolerate. The only good thing she associates with this hidden world is the memory of a little boy who lived next door when she was a child and who could also see the strange things that followed her. He left ten years ago, promising to return, and though Misao treasures her memories of him as her first love, as her sixteenth birthday approaches she is starting to wish she could let him go and just find a normal boyfriend. Unfortunately, when she is finally approached by a boy she likes–a popular school athlete–he turns out to be possessed by a demon who wants to eat her in order to obtain eternal youth. Evidently, Misao is a very special kind of human of which only one is born every hundred years. Her blood and flesh offer extended life to any demon who tastes it, and marriage to her will grant prosperity to his entire clan. Misao’s childhood love, Kyo, comes to her rescue just in time, but he reveals himself to be a demon as well (a powerful tengu with spectacular black wings), determined to marry her as the head of his clan. Though it becomes clear that Misao requires Kyo’s protection to keep from being eaten or snatched up by other eager demons, she is heartbroken by the discovery of his motives and does her best to resist him and the seemingly inevitable future he insists that she accept.

Though as the controlling love interest Kyo is mainly nurturing rather than cruel (unlike the male characters in, say, Hot Gimmick) there are some specific moments in Black Bird that should really should be deal-breakers. “You know I won’t drop you. I just wanted to teach you a lesson,” Kyo says to Misao as he carries her out of danger. “You can’t live without me. I have to teach your body that.” A line like that is something that would normally send a reader like me running for the hills (or at least send the book flying swiftly into the trash can), yet there is something compelling enough about Kyo and Misao’s relationship that it manages somehow to remain palatable, even after that.

The secret to this must be Misao. Though she is obviously unable to put aside her feelings for the boy she was close to so many years ago, she has enough self-respect to reject him once she discovers what she believes to be an impure motive, and is able to stick to that (for the most part) throughout the volume, despite the fact that her horrific situation constantly requires her to be in his company. Her situation is awful and she knows it. She is in love with her memory of Kyo as a boy, obviously attracted to him as an adult, and able to trust that (if nothing else) he at least does not wish to eat her. He is, in all honesty, the only person she has to rely on, which makes her situation very sad indeed, and she is fully aware of this fact. Her personal struggle through all of this is the most powerful, poignant thing about this story, and it is for her sake only that I find myself hoping quite fervently that she will be able to teach Kyo how to become someone worth her love so that she may keep him (and the much-needed protection he offers her) without being forced to compromise herself just to survive. 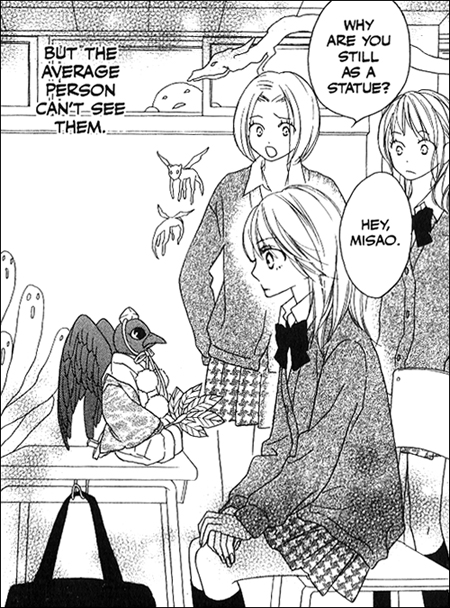 Another aspect of the story that makes Black Bird appealing is its unexpected, undeniable cuteness. Both the flashbacks to Misao and Kyo’s childhood as well as some of Misao’s present day encounters with spirits are intensely adorable, to the point of eliciting multiple coos and sighs. Furthermore, Kyo’s tiny tengu servant, Taro, (who looks like a 6-year-old human boy) may be the cutest thing to grace the page since Yotsuba, and I would read the series only for him if that’s what it came down to.

Though this manga contains several elements that are unquestionably problematic, at least for this reader, it still manages to please. With its conflicted heroine, adorable art, uneasy romance, and unabashed eroticism, Black Bird is an unlikely mix worth trying.

Volume 1 of Black Bird will be available on August 4, 2009. Review copy provided by Viz.