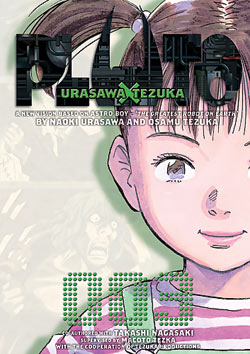 Based on the story “The Greatest Robot on Earth” from Osamu Tezuka’s Astro Boy series, Naoki Urasawa’s Pluto takes place in a future world in which robots and humans live as equals. It begins by following a detective named Gesicht (a robot with exceptional sensory abilities) as he takes on two similar cases–the murder of a robot war hero who was beloved by the world and the murder of an activist who worked to preserve existing robot civil rights laws. Though the lack of physical evidence at both crime scenes suggests that a robot is the culprit, robot laws forbid a robot from killing a human which makes that possibility complicated and potentially very volatile.

The third volume turns the focus to humans, particularly those who are discontented with the laws preserving robot equality–some of whom are willing to do whatever they must to destroy all robots. A German businessman named Adolf who belongs to a secret human supremacist society (portrayed as similar to the Klu Klux Klan), discovers that his brother, whose body is about to be finally put to rest after the government’s mandated three-year waiting period for criminal burials, was almost certainly killed by a robot and not a human policeman as stated in official reports. The heads of the group–all prominent businessmen and other influential types–see this revelation as the perfect opportunity to turn society against robots, though they must be careful not to reveal anything about the “victim” who was apparently the perpetrator of some extremely hideous crime and whose identity, if known, would most likely lead to public support for the robot policeman who killed him. Their campaign is aimed at Gesicht, who is one of a handful of robots capable of using the weapon that killed Adolf’s brother. This volume also provides an unusually touching look at a robot with the ability to make flowers grow–a story that turns out to be something much different than what it initially seems.

Despite the fact that I’ve spent three large paragraphs describing the plot of this series in order to be able to begin truly discussing its third volume, there is so much to tell, be assured that this has barely scratched the surface. What is most remarkable about Pluto, however, is that regardless of all of this, the plot of the story is really not the point. Despite its focus on robots, what Pluto really explores is the nature of humanity. Earlier in the series, there is quite a bit of discussion regarding Brau 1589. Scientists have never been able to discover what went wrong with his AI (he was “perfect”), and it is strongly hinted later on that it is his perfect replication of humanity that was responsible for his ability to kill. This idea is advanced in volume three by the arrival of Epsilon, one of the remaining advanced robots and the only one to refuse to be drafted into the war, who insists that they must sever their connection with humanity or risk grave consequences.

Something that is a focus throughout the series is the question of the extent to which robots can experience emotion, and it is made quite clear that they can. What is especially interesting, however, is the evidence suggesting that this is something that is evolving, in the advanced robots particularly, and that it may be the experience of feeling despair that makes the difference between someone who can deliberately kill another human and someone who can’t. In volume two, Gesicht was given a glimpse into the memory of Brau 1589, which was so dark and horrifying he could not even make sense of it, at which point Brau implies that it is Gesicht’s lack of development that is responsible for his inability to understand. Volume three explores despair further by revealing scenes from Adolf’s childhood in which he watches his father driven to suicide after the loss of his job to new robot workers, and goes on to illustrate what kind of men Adolf and his brother become after experiencing that kind of loss. The idea that it is perfect humanity that could make robots truly cruel rings uncomfortably true and it will be fascinating to watch where Urasawa takes this.

Having not read “The Greatest Robot on Earth,” (something I intend to remedy before the release of Pluto‘s next volume, I feel at a disadvantage in terms of comparing Urasawa’s vision to the original source. It is difficult to imagine, however, that the original work could have included the level of nuance utilized in Pluto. The characters here are so wonderfully and delicately layered, robots and humans, and though they are here in the framework of a seriously fantastic science fiction story, the first thing that comes to mind when I try to describe it all is “heartache.” It makes my heart ache to watch where people’s (and robots’) emotions and experiences have brought them to in this story, and I mean that in the very best way. Even hateful robot-hating Adolf is able to evoke sympathy when characterized so masterfully, though the same can’t yet be said for his slimy, politically manipulative cohorts.

Urasawa’s art is stunningly cinematic–perfectly conveying each emotional beat as the story races on. His character designs are distinctive and realistically drawn, and even his non-human-looking robots manage to be expressive.

Looking forward to future volumes, I’m anxious to see more of Atom, who provided one of the most poignant moments in the second volume as he excuses himself to the bathroom in order to shed tears over something he saw in Gesicht’s memory chip. Though he is obviously capable of adult logic and response, his childlike existence makes him appear more fragile than he is–or perhaps reveals some fragility otherwise hidden. His little sister Uran–a robot with an extreme sensitivity to fear and emotion in humans and animals who plays a prominent role in this volume’s later story–observes during the second volume that it is Atom who is the most scared of all. This is one of the many aspects of the character I’m anxious to see further explored.

It is a rare treat to find a series as intricate, well-plotted, and touching as this one, and I feel lucky to be able to experience it. Pluto is, quite simply, breathtaking.