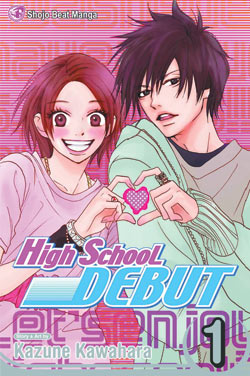 Haruna Nagashima is a former middle-school softball champ, determined to start off her freshman year of high school on a brand new foot by becoming attractive to boys and finding her first boyfriend. Despite her exceedingly diligent research of current styles and trends, her efforts to attract a boy seem hopeless until she meets Yoh Komiyama, a popular, good-looking upperclassman with an unusual eye for what makes girls look their best. Though initially reluctant, Yoh finally agrees to act as Haruna’s “coach” to teach her how to make herself attractive to boys–his sole condition being that she promise not to fall for him. Of course she eventually does fall in love with him, finally confessing after a chapter or two of anguish, certain she’ll be rejected. 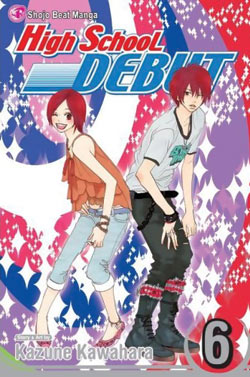 I’ve praised another Viz series, We Were There, for taking standard shojo stereotypes and making them into real people. High School Debut actually manages to do the same thing, but by taking things completely in the opposite direction. While We Were There succeeds by bringing these stereotypes down to earth, High School Debut pushes them even further over the top–so far over, in fact, that by the time they reach the other side, they are finally stripped of any pretense and laid bare all to see.

Haruna is unbelievably energetic, ridiculously enthusiastic, and frighteningly dense. She throws herself at everything with complete sincerity and utter humility–determined to do her best at all costs. Yet despite that stream of adverbs and adjectives, she is also, well… energetic, enthusiastic, sincere, humble, and dense. Just like that. All of her extreme personality traits have a foundation of such truth, as unbelievable as they are it is impossible not to believe them. Yoh is absurdly reserved and awkward with girls for someone of his popularity–entirely unable to express his feelings and embarrassingly hapless at romance. Yet his strange cluelessness comes out of such a sincere place and reveals such poignant vulnerability, he somehow becomes utterly real. All of this goes double for their relationship, which is absolutely delightful to behold.

Despite their mutual awkwardness with romance, there is an undercurrent of consistent, tangible affection between Haruna and Yoh that is oddly unusual for this type of story. Regardless of the obstacles thrown in their way (most of all, themselves) once they get together that affection remains so strong, there is never any true shred of fear that they can be torn apart despite the efforts of some of those around them. Even though their relationship is so chaste they’ve only progressed as far as kissing–and even that just a handful of times–there is a particular trust and intimacy between them that makes them appear unbreakable, and it is a testament to the skill of the mangaka that the story remains so compelling regardless of this stability. 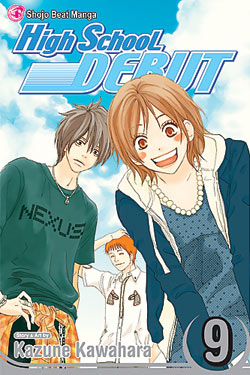 One of the hardest things to maintain in a story is a happy, healthy relationship, and Kazune Kawahara manages to do that over eight and a half volumes (with the promise of more to come). Sure there are snags here and there–a misunderstanding or a moment of jealousy–but Haruna and Yoh’s mutual devotion is so clear on every page, uncertainty in their relationship is never used as the means for moving the story forward. The story’s momentum actually comes from the raw energy of their affection for each other, as they learn about each other and themselves through their own mishaps and those of their friends.

Kawahara’s art is expressive and quite lovely, with attractive character designs and dramatic panel layouts. Like the story itself, the visuals stay firmly rooted in typical shojo high school romance (and everything that goes with that) while somehow maintaining a fresh, honest feel.

If this review seems somewhat brief for a ten volume write-up, it is, but that’s because the strongest message I can possibly convey here is: Read High School Debut. If you’re a fan of shojo manga, this story will hit all your weaknesses and then some. If you think you’re not a shojo manga fan, this could be the series that will prove you really are. Offering the best of shojo high school romance formula without ever falling victim to it, High School Debut is a pure joy.