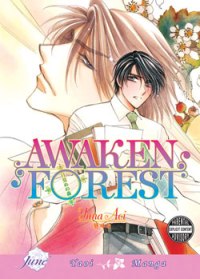 Awaken Forest is a collection of three boys’ love stories, each featuring men who use lying and manipulation to get what they want. The title story is a tale of two brothers—an author who was injured as a child and his older brother who is bound to serve him for life in order to atone for injuring him. When he realizes that his brother has fallen for a young editor from his publishing house, the author (who has been faking his ongoing injury for quite some time) decides to release him from service, but even then he uses cruelty and manipulation to do so, going so far as to order his brother to molest the editor in front of him.

The most blatantly manipulative character, however, is in the collection’s second story, “Loose Bonds,” which features a man named Ren who hires a former school bully to steal his best friend’s girlfriend, leaving the friend with nowhere else to turn but to him. This story is easily the darkest of the three, as it is the only one in which the victim remains unknowing to the end. “If you don’t want him to go outside, then make him never want to,” Ren says as he pricks his pet bird with a sharp pin to keep it from leaving its cage, providing a deeper glimpse into his true pathology.

This manga provides the beginnings of what could be an interesting exploration of the darker sides of human nature, but its stories’ scenarios are too neatly contrived to be believed, making it impossible for any of them to rise above pure romantic fantasy. Most of the boys’ love staples are present—rape, incest, pretty straight men lured into a web of “forbidden” love—and though the author manages to pull off these fantasies more delicately than some, there is no sense of anything richer lurking below the surface. The art, too, is very typical of the genre, featuring generically pretty, interchangeable men over dull, sparse backgrounds.

Though its stories’ themes suggest the potential for something deeper, in the end, Awaken Forest is just another disposable yaoi title to be consumed and quickly forgotten.