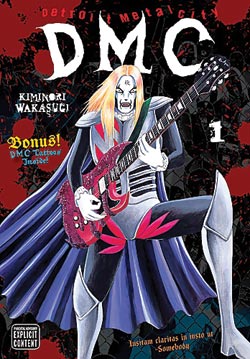 That said, this is an extremely funny and oddly endearing manga, and by the time the volume ended I really wanted more. Soichi is incredibly sweet and loveable, and unlike Charlie Brown, it’s hard to believe that he’s as hapless as he appears when he’s able to be so aggressive as Krauser. Krauser is his alter-ego–the perfect vehicle for Soichi to act on his life’s frustrations, and if it’s a little unsettling that he uses his alter-ego to say things like, “I shall rape all women. Spread ’em wide you fucking sows,” that’s what makes him as intriguing as he is and offers the greatest bit of hope that the series might eventually develop a real overarching storyline.

Before going further, I should say very clearly: This manga is deliberately crude, relentlessly profane, and may not appeal to all readers. The word “fuck” appears probably on every other page (in fact, later in the volume, Krauser and retiring death metal god Jack Ill have a “Japan-America fuck battle” which consists of each of them screaming the word repeatedly onstage until one of them loses his voice), Soichi’s manager references everything in terms of whether or not it turns her panties into “clam chowder,” and Krauser ‘s diatribes consist mainly of promises to rape and murder everyone… in hell. Thing is, unlike most movies and cable television shows that try (and fail) to pretend that crass dialogue equals humor, in Detroit Metal City, it actually does. This isn’t a lame, sophomoric attempt at pretending that profanity alone is cutting-edge humor. It is proof that it really can be when executed well.

Detroit Metal City takes South Park and goes one better by making Soichi utterly sincere within his unbelievably vulgar life. When Soichi earnestly sits himself down to try to take the lyrics from his heart (“Let’s go, let’s dress up and go to town, with cheese tarts in one hand, you’re romping around”) and make them into something appropriate for DMC (“Let’s go kill everyone dressed up in town, with chainsaw in one hand, you’re slashing around”) it is not only funny, but also honestly sad, moving the story a notch above pure satire. Will Soichi ever be able to find some middle ground between cheese tarts and chainsaws–a place where he can live authentically as himself? After all, the existence of Krauser would suggest that on some level he is fooling himself with his Swedish pop band dream persona, which is perhaps no more real (or just as real) as Krauser. Who is the real Soichi and what does he have to offer to the musical world? Perhaps Detroit Metal City‘s greatest accomplishment is that it makes us care about the answers to these questions even while it is cracking us up over the ridiculousness of Soichi’s situation.

Wakasugi’s dense art splatters itself over the page in a way that is extremely appropriate for the subject matter, and the scenes featuring DMC in performance (in full makeup) are especially fantastic. A lot of the emotion is visually overblown, which matches the manga’s tone perfectly, and though the panels are often very busy, they are never difficult to follow.

Though it’s hard to see for sure how far this manga can go and maintain the effectiveness of its first volume, at this point, Detroit Metal City is a raunchy, hilarious bit of satire, packed with just enough honesty to place it a cut above the rest.

Volume one of Detroit Metal City will be available in stores on June 9th, 2009. Review copy provided by Viz.