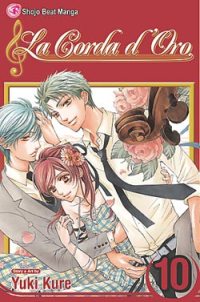 As Kohoko and the other contestants head into the final selection of Seisou Academy’s music competition, there is a last-minute shake-up when the decision is made to change the order of their performances to reflect their scores up to that point in order to show off the strongest musicians for Mr. Kira, a young man whose family runs Seisou Academy and who believes the music competition is, in his words, “a bit silly.” The change is a shock for all of the contestants, though prickly violinist Len surprises everyone by protesting that it undermines their performances to make them suddenly aware of their standing in a competition that is supposedly about promoting the enjoyment of music. Finally, however, the performance goes on with each of them demonstrating the impressive growth they’ve experienced during the competition, especially Kahoko who is performing for the first time without magical assistance.

There is a lot of reflection in this volume, especially on the part of Kahoko, who spends much time pondering her first meetings with the other contestants and how her relationships with them have progressed to this point. It’s quite an emotional volume, too, with some very moving moments, particularly Kahoko’s encounter with Len just before she goes on (in which he offers to help her replace her E string with the one formerly magical string remaining, saying, “It means something to you, right?”), her performance itself, and her tearful goodbye with Lili who made it possible for her to learn that she loves music.

With at least two more volumes to go, it’s hard to see where the story will find the momentum to move forward now that the competition’s final selection is complete. There is the question of Kahoko’s love life and perhaps some drama to come regarding the flippant Mr. Kira, but it will be interesting to see where this goes now that it has passed what would seem to have been a comfortable stopping point. La Corda d’Oro may not be a masterpiece, but it is sweet, heartwarming, and oddly addictive with its cast of attractive characters so sincere in their musical pursuits.