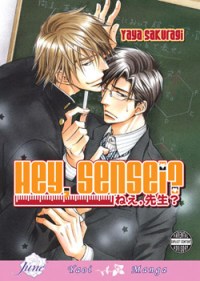 Isa is a high school math teacher who discovers, not uncommonly, that one of his students has a crush on him. What’s unusual about this student, however, is that he happens to be a boy, Homura, who is also the younger brother of Isa’s ex-girlfriend. At first believing Homura’s advances to be a joke perpetrated in retaliation for his sister’s broken heart, Isa resists, despite recognizing his weakness in the face of Homura’s charms. Homura perseveres, Isa eventually succumbs, and the two of them begin a relationship.

Though this student-teacher relationship is problematic from the outset, putting aside Isa’s blatant irresponsibility as a caretaker of young minds, the story is really quite charming. The mutual history of the two characters gives them a place of intimacy to start from that helps to soothe the worst concerns, and Homura is so self-aware, it’s difficult to feel that he’s being taken advantage of. Both characters are lonely misfits of a sort—even Homura with his good looks and popularity with girls—and it’s gratifying to watch them finding a sense of belonging with each other as the story goes on. Though Homura’s impatience nearly causes him to take Isa by force at one point, thankfully he realizes this is not at all what he wants and does not go very far with it.

Yaya Sakuragi’s art is also a highlight. Her faces are expressive (both in the main feature and in the short extra story, “Unbreakable Bones”) and her lanky character designs help to alleviate worries about the age difference between Isa and Homura as well, as Homura’s body is unambiguously adult.

With its sweet, idiosyncratic characters and warm love story, Hey Sensei? is easy to recommend to any fan of the genre.