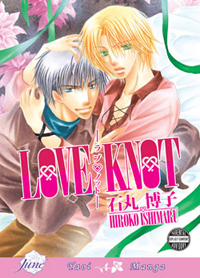 Keigo Someha is a private detective who retrieves a boy he finds collapsed in the street and brings him home. To his shock, the boy (Emiya) asks to stay with him forever, which Keigo refuses until it turns out that Emiya has extrasensory abilities that can help Keigo in his work. Unfortunately, Emiya can also see Keigo’s hidden secrets, including the fact that he moonlights as an assassin. When Keigo discovers that Emiya has escaped from a secret government facility he tries to protect him, but with a tracking device implanted in Emiya’s neck the government is capable of finding him anywhere. Soon Keigo and Emiya realize they have fallen in love and Keigo becomes even more determined to wrest Emiya from the powerful grip of the government.

This manga has numerous elements that could make up an interesting story but they are all so underdeveloped that there is honestly no real chance. All the most intriguing bits–Keigo’s side job as an assassin, Emiya’s life-long isolation from the real world, the government project Emiya is being used for–are addressed only on the most surface level. Keigo mentions how surprised he is to fall in love after so many years as a killer, but he displays no evidence of any psychological damage or any real attachment to the job, so when he finally declares he is going to give it all up for Emiya’s sake, it’s about as dramatic as if he’d declared he was giving up sweets. Emiya’s innocence ends up being used only as running gag and a rather creepy device for explaining his ignorance in bed. The government project is barely explained and its main scientist’s sick fixation on Emiya is too shallow to be believed. The story’s art is serviceable and blandly attractive, but fades quickly from memory.

On the upside, Keigo and Emiya’s relationship is warm and consensual, even if develops much too quickly to be real, and there are a few nice scenes played out between them. Unfortunately this isn’t nearly enough to make up for the lack of depth throughout. Perhaps in a longer series, these characters could have been more fully realized, but as it is, Love/Knot fails to provide any real insight into the human heart.