Here’s a quick review for the weekend! I’ve been binging on shojo lately, and it shows! 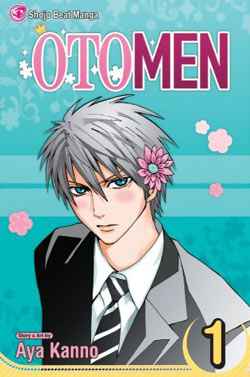 This book is charming, breezy, and fun, and though it’s difficult to know how serious it’s ever going to get about Asuka’s plight, for the moment it’s too enjoyable for that to matter. The main characters are in some ways reminiscent of those in Ai Morinaga’s Your & My Secret in that they are written as extreme stereotypes of the opposite gender, yet both of them are more in touch with who they are than the characters in that story, and despite being obvious stereotypes there is something very true at the core of each of them that makes them lovable and completely adorable.

Asuka is adorable as he absentmindedly sews cute stuffed animals and expresses his surprise over how much he identifies with the latest chapter of “Love Chick.” Ryo is adorable as she presents her friends with atrocious (huge) rice balls and manages to remain so oblivious to the trappings of romance that she keeps inviting Juta along on her dates with Asuka. It’s absolutely impossible not to root for Asuka and Ryo as they embark on what may be the Cutest Romance Ever, especially when it begins with Ryo leading a frightened Asuka out of a dark, unused school building and then kicking a hoodlum in the head when he suggests that Asuka is really a wimp. “Asuka, you’re really cute,” she says (a scene recreated later in “Love Chick” with the genders reversed, of course). “When I look at you, I start to want to protect you.”

Underneath the story’s playful charm there are few deeper issues lurking, and it will be interesting to see which of these (if any) are brought to the surface over the course of the series. Asuka’s determination to hide his true personality is primarily for the sake of his mother who was traumatized by her husband’s decision to leave her in order to pursue a new life as a woman. Whether or not she can ever accept her son’s feminine side and take responsibility for making him ashamed of his own talents and desires is something I’d like to see addressed down the line. Also, Juta is quite a piece of work. Though he chases after every girl in school and claims to love all women, his ultimate ideal of perfect femininity is actually Asuka, and in fact when at one point in the story he attempts to use real girls as a model for his character, he is completely unable to do so. Whether his interest in Asuka is strictly professional remains to be seen.

Aya Kanno’s art is as charming as her story. The characters are distinctive, expressive, and pretty to look at, and the layouts have the same cheery, whimsical mood as everything else. Even the action scenes play really well, which is not something necessarily expected in this type of manga.

Overall, Otomen is a thoroughly enjoyable read. For lighthearted fun and a clever look at traditional gender roles, this manga is a fantastic choice.