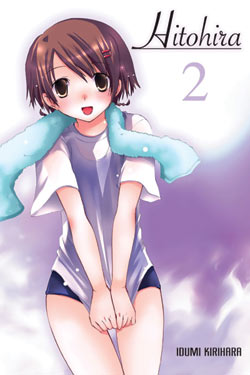 As volume two begins, Mugi and the rest of the Theater Research Club have headed off to theater camp, where Mugi is informed that she’ll be playing the leading role in Nono’s new play–a part written especially for her. Mugi panics, and eventually has enough of a breakdown during Nono’s relentless rehearsals that she decides to leave the group. Everyone freaks out, Nono remains stubbornly firm, and in the end, Mugi agrees to give the role a try. Mugi starts to show real growth in this volume and even finds a little romance brewing with adorable club-mate Kai. This volume also reveals more about Nono’s past, especially concerning her relationship with former friend Mirei.

I had some hope that volume two might be stronger than the first volume, and this volume actually exceeds what I’d dared to expect. The story’s treatment of theater is still oddly cold and under-researched (real theater students honestly don’t spend all their time reciting tongue-twisters), but its characters really start to take shape here, and if I’m not left caring much about theater, I can’t help but care for them. With Mugi beginning to show her strength, Nono has become the vulnerable one now, and this shift works really well. Even the humor is more effective in this volume, something I would have considered to be a lost cause.

It still bothers me that Aurora is marketing this as shojo, when it is published as seinen in Japan and the whole series is filled with such obvious moe imagery–and I say that as someone who does not consider “moe” to have necessarily negative connotations. I love many, many manga and anime series that are firmly ensconced in moe, but let’s tell it like it is, okay Aurora? You printed that cover, now let’s be honest about it. My irritation on this point is, of course, irrelevant to the quality of the manga, and I don’t want to downplay that especially now that it has improved so dramatically, but it is bothersome even so.

Aurora’s marketing issues aside, volume two of Hitohira is definitely worth reading, and I am now happily anticipating volume three.

Volumes one and two of Hitohira are available now on sale from Aurora until April 30th!