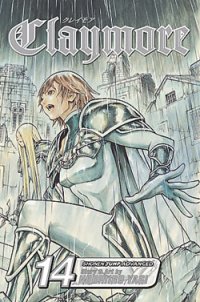 Volume thirteen sent Clarice and Miata on a mission to execute Galatea and as volume fourteen begins they finally find her hidden away in the holy city of Rabona. As it turns out, the Organization’s discovery of her was not an accident but actually planned by Galatea in hopes that she, along with the Claymores sent to kill her, would be powerful enough to destroy an Awakened One (former number 2, “Bloody Agatha”) who has been menacing the city. The rest of the volume centers on the battle with Agatha, which does not proceed quite as Galatea hoped, followed up by a couple of thick extra chapters which provide more backstory on Priscilla, Isley, and Clare.

The most interesting aspect of this volume is the relationship between Clarice and Miata, which becomes quite touching during the main battle and leads to an emotional breakdown for Clarice, who is intensely frustrated by her own weaknesses. It’s not clear yet just what role she plays in this story overall but her character is intriguing and certainly destined for something special. This volume’s greatest weakness is the drawn-out battle with Agatha which goes on just a bit too long, though by the end it is clear that there is much excitement ahead and the last few pages of the main story are seriously kick-ass.

In any long series, it is inevitable that some volumes will move the story along more substantially than others, and though volume fourteen falls into the latter category, it is obvious that everything playing out here is necessary setup for what’s to come. For fans who love a battle this volume delivers nicely, and there are enough fantastic gems of information in the extra stories (particularly concerning how trainees become warriors) to satisfy the rest.