Here’s a quick review for the weekend. Hope you enjoy! Don’t miss the sales pitch at the end. :) 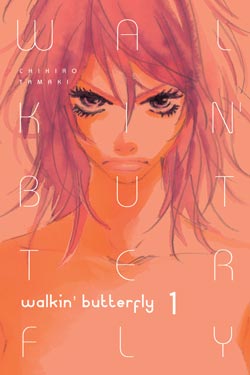 What makes this story fantastic is Michiko, who strikes down female manga stereotypes left and right with her foul manner and her apparent habit of crashing motorcycles. I admit I went into this story expecting to roll my eyes a bit at the hard, painful lives of the tall and gorgeous, but this manga was not about to let me get by with my biases, and its greatest tool for that is Michiko. She is lonely, frustrated, and pissed off at the world, and watching her slowly discover a way to channel that angry energy into something that might actually lift her up is incredibly gratifying. Michiko rages through life, breaking things before they can have a chance to break her, and it’s difficult to imagine any reader being able to turn a cold shoulder to that kind of raw pain. At the end of the volume, when she bursts in to the office of the washed-out modeling agent who earlier rejected her and strips down naked to prove that she’s ready to love her own body, the moment is truly awesome.

The story has its share of intriguing supporting characters as well, particularly Nishikino, the childhood friend who treats Michiko like she matters, Mihara, the cold designer upon whom Michiko wishes to take revenge, and Tago, the alcoholic (female) agent who Michiko ultimately thrusts her hopes on. Most of the story’s main players are prickly people who communicate poorly (or at least insensitively), Michiko included, and this just adds to the raw feeling of the whole story.

The art is kinetic and course, like Michiko, and it expresses everything about her so well. There is nothing romantic or overly attractive about the character designs, even the professional models in the series which is really quite refreshing, and the visual storytelling is very strong.

Three volumes of Walkin’ Butterfly have been released in English so far by troubled Aurora Publishing, and some fear has been expressed that the fourth volume might never see the light of day. The best way to combat this fear, of course, is to buy their books! Aurora has all of its books on sale right now. Older books (including all three available volumes of Walkin’ Butterfly) can be had for $5 apiece, and new releases for $8. The sale extends to all of Aurora’s imprints, including Deux and LuvLuv as well. Books on sale include a few I’ve liked very much, such as Deux titles Future Lovers, Seduce Me After the Show, and Red Blinds the Foolish. It’s a great time to stock up!