Here is the last of my “quick” reviews for this week! Please enjoy it! 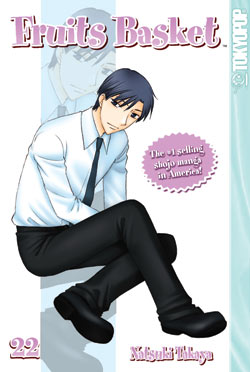 With the level of drama that volume 21 of Fruits Basket provided, it was hard to imagine that the next volume could actually be stronger, but it is. Still barred from visiting Tohru in the hospital, Kyo decides to face down his own demons by visiting his father who rejected him so many years ago. It is a painful meeting and provides nothing even close to reconciliation, but Kyo is at least able to declare his determination to live regardless of carrying the cat’s curse. Meanwhile, Akito makes the decision to end the curse entirely, resulting in emotional scenes for everyone and Akito most of all.

This is an incredibly lovely volume with everyone’s hearts laid bare and by the end, when the true, heartbreaking story of the curse is being revealed (“…that the Cat’s wish was finally granted”), I had tears in my eyes. What’s especially skillful about Natsuki Takaya’s storytelling in this series is that she balances the romance and the supernatural story just right, ensuring that the reader is equally interested in the outcome of both, so that when the story really finds its conclusion it is satisfying on more than one level. Not only that, she manages to make each of the character’s personal arcs intensely compelling, even those of minor characters, so with all of these achieving their dramatic climax at once, the effect is really quite stunning. It’s impressive too that after all this time, the character whose story here is probably the most moving is Akito’s. “I don’t have to be ‘special’ anymore. I don’t have to be ‘God’ anymore,” she says just before her final goodbye, filled with both terror and relief. “I can just be… me. Right?”

The art, which I’ve always felt was one of the weakest points of the series, plays a significant role in the effectiveness of this volume with so much emotion to be expressed, and it’s all done quite beautifully. Many of the strongest moments are purely visual, such as Kyo tearing off his bracelet as he realizes he’s been freed. And though the character designs have never been anything really special, I can’t deny that just the sight of the little cat in the ancient tale is so cute and heartbreaking that it brought me to tears really all on its own.

Takaya’s only truly unfortunate habit is the way she lays out text, and while in the previous volume I felt that it actually helped slow things down to reveal more clearly the story’s deeper layers, in this volume it has returned to its usual role of messing with the pacing and making it difficult to tell what is dialogue and what is just thought. This is a small complaint in the scope of everything that is outstanding about this series, but there are moments in which it is quite significant.

With just one volume remaining, it’s hard not to feel sad about this series finally winding down. It’s such a treat to read a series with so many compelling characters and such consistently strong storytelling, and I will miss it very much.