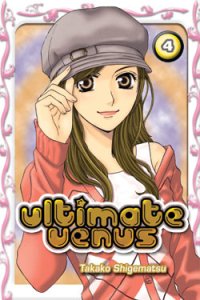 At the end of the last volume, Yuzu had determined to foil her grandmother’s plan to force her into an engagement announcement at the wedding hall’s grand opening, and as volume four begins, she struggles for a way to follow through. Just as her plans are finally coming together, her bodyguard, Hassaku, figures out what’s going on and at first Yuzu worries that he’ll betray her plans out of loyalty to her grandmother. Thankfully he does not, and the plot works beautifully but this is not the end of Yuzu’s problems as her grandmother makes it clear that she will marry one of the three men chosen for her whether she likes it or not. After a painful rejection from Hassaku, Yuzu agrees to meet the other men, unaware that one of them would be her childhood friend Sudachi who has his own reasons for not wanting to be forced into an arranged marriage. Unfortunately, it seems inevitable that Yuzu will continue to cling to feelings for Hassaku, despite the fact that there are so many more interesting men around her.

After a fun start, this volume drags in the middle as Sudachi’s reluctant courtship begins. Still, there are some interesting moments, particularly with Masaya, the first of Yuzu’s so-called fiancés, and the book ends with a fairly troublesome misunderstanding that is sure to shake things up in the next volume. The premise of this story is startlingly similar to that of Kiyo Fijuwara’s Wild Ones, yet Ultimate Venus is so much more fun. Each of the characters is likable and idiosyncratic, and elements that feel tired and contrived in Wild Ones read as whimsical here.

Though this is far from the series’ strongest volume, it provides an opportunity for some nice character development and sets up some intriguing plot points as well. Ultimate Venus may not be a shojo masterpiece, but it continues to be a fresh, fun read.