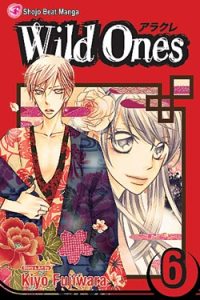 After volume five’s focus on holidays and gift-giving between Sachie Wakamura and her Yakuza family, volume six begins with a new school year and the introduction of Sachie’s new teacher who turns out to be her childhood friend, Chi-chan. Unfortunately, Chi-chan has a long-standing grudge against Sachie (of which she is completely unaware) and begins a campaign of harassment with the intent of exposing her family history to the entire school. Fortunately, even Chi-chan is eventually won over by Sachie’s plucky sincerity, and becomes yet another ally by the end. Also in this volume, Sachie saves a man’s family restaurant from unscrupulous loan sharks, and it is this plot that allows further development of the volume’s real drama—the continuing romantic rivalry between Rakuto and Azuma. Not that the rivalry actually gets anywhere. Though Azuma comes very close to confessing his feelings to Sachie, in the end he chickens out, leaving things essentially unchanged.

Out of all the things that are maddening about this series—the unbelievable premise, the warm-fuzzy Yakuza guys, the lack of any actual crime—the most maddening by far is the near suspended animation of the story’s romantic plot. While it’s usually effective to keep romantic tension going for as long as possible, in this case, the romance is just not exciting or complicated enough to withstand the wait. Sachie loves Rakuto, Rakuto loves Sachie, and so it has been for the entire length of the series. Everybody knows this. Nobody appears to object besides Azuma, and even he is visibly frustrated by Rakuto’s persistent inaction. In a more complex story this kind of anticipation might be intoxicating, but here it just makes the drama feel forced and repetitive.

That said, the volume does have some warm moments. The characters grow, little by little, and the uncomfortable bond between Rakuto and Azuma is almost interesting enough to make up for the endless drudgery of the romantic plot. While this series remains decidedly mediocre, there is still some distant hope of it one day finding its spark.