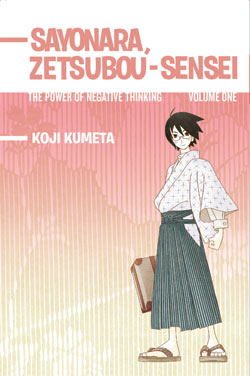 Schoolteacher Nozomu Itoshiki is pessimistic, depressed, and fed up with the world. He is first introduced attempting to hang himself from a cherry tree, where he is discovered by student Kafuka Fuura, who nearly kills him in the process of trying to pull him down. “What if I had died?” Nozomu exclaims, setting the tone for this whimsical black comedy from the start. Kafuka is the polar opposite of Nozomu, excessively optimistic to the point of delusion. Unable to believe that anyone could consider suicide on a beautiful spring day, she insists that Nozomu must have been trying to “make himself taller,” a practice she confesses her father took up often when faced with hard times. “At times, even mother would try to grow taller,” she says brightly, pushing Nozomu’s patience to the limit. Thus the two who never should have met, meet—the man who views everything negatively, and the girl who views everything positively.

Despite the inauspicious nature of their meeting, it seems that it was destined (or at least unavoidable), as Nozomu soon discovers that Kafuka is a student in his new class. The rest of the volume proceeds to introduce Nozomu’s other students one by one, each of whom is an extreme example of a dysfunctional stereotype—a stalker, a hikikomori (shut-in), an obsessive-compulsive, an abusive e-mailer, et cetera—most of whom develop some kind of fixation with their teacher. Though the premise could easily become mean-spirited, it never does, and each of the characters is presented with both humor and affection, the most poignant perhaps being Nami, the “ordinary” girl, whose only defining trait (much to her dismay) turns out to be that there is nothing really wrong with her at all.

Nozomu is not exactly a misanthrope, though he does suspect most people of plotting to wrong him, and he bonds with his students in spite of himself, if sometimes in slightly disturbing ways. Yes, he tears down their aspirations, belittles them with low expectations, engages in blatant favoritism (“Hold it! Don’t bully the girl I’m favoring.”), abandons them in class, and occasionally evaluates them as potential candidates for double-suicide. Yet somehow, through the filter of Koji Kumeta’s dark humor, he manages to be charming and almost warm as he leads his small band of misfits down the road to despair. His students are delightful, each in her own way, but Nozomu is the unlikely touchstone who keeps things grounded, and during the chapter or two in which he plays truant, his absence is keenly felt. Fortunately, the humorous payoff when he finally returns to the page is well worth it.

The real secret to this manga’s success is that nothing is ever allowed to become too serious or biting. The humor is dry but never bitter, and though some of the jokes translate better into English than others, each leads deftly into the next, showing off Kumeta’s satirical prowess. Even the fan service is played for laughs, deliberately inserted into the most absurd situations. The humor is sharp but never cutting, and the juxtaposition of complex satire, silly puns, and simple sight gags ensures that the mood remains light throughout.

One of the best visual gags happens quite early on as the book introduces Matoi Tsunetsuki, a girl who obsessively stalks any guy she falls for. After becoming interested in her teacher (Nozomu) she begins following him. This causes the boy she was previously interested in to become jealous, and so he starts following her. Another girl who is interested in that boy notices, and starts stalking him, and so on, until there is finally a chain of stalkers, each following the last with minimal subtlety.

The art is nicely clear and deceptively simple. Most of the girls are so similar in design, they look like a single girl with interchangeable hair, though the level of individuality granted to them with just hairstyle and expression is pretty impressive. The overall design is more complex, filled with fantastic angles and fun backgrounds, all in a wonderfully crisp style that manages to be both detailed and clean at the same time.

The book is dense with obscure jokes and Japanese cultural references, painstakingly annotated by translator Joyce Aurino over a whopping twelve pages at the back of the book. With so much information provided, it is easy to fall into the habit of checking the endnotes obsessively while reading, but this is really not a good idea. With a few exceptions (and despite what must have been an incredibly difficult translation process), Aurino’s adaptation stands strongly on its own, and though the notes are very interesting and informative, the interruption of the reading experience is simply not worth it. In most cases the context itself is sufficient, at least for the first read-through, and the notes can be viewed as an enlightening bonus to be enjoyed afterwards. With multiple layers of satire at work, this is definitely a book worth re-reading, so there are plenty of opportunities to catch new jokes that may have slipped by on the first read or two.

It is probably safe to say that the success of Sayonara, Zetsubou-Sensei with any individual reader will depend entirely on whether or not that reader’s sense of humor meshes with Kumeta’s, and this question should be clearly answered by the end of the first chapter. If it’s not funny by then, it’s never going to be. But for those who are laughing by the end of the chapter, this book will provide a rare treat which, thanks to Del Rey, is about to become more common.