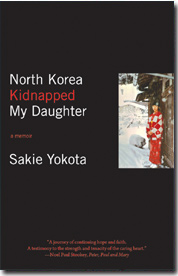 In 1977, middle school student Megumi Yokota disappeared on her way home from school in the coastal city of Niigata, Japan. Despite massive efforts on the part of the community and the local police, Megumi’s disappearance was never solved. It was years later that Megumi’s parents finally received information leading them to believe that she, like several other Japanese citizens known of at the time, had been abducted by North Korean agents. It was not until 2002 that North Korea officially admitted to the abductions, but question remains over whether or not Megumi is still alive, leaving her family without resolution or relief.

Written by Megumi’s mother, Sakie Yokota, North Korea Kidnapped My Daughter is by no means a highly polished work of nonfiction. As a writer, Yokota tends to dwell too much on details while letting some of the larger questions out of her grasp, and the last few chapters start to feel repetitive as she reaches for an ending that does not exist. What this book definitely is, however, is a stunningly moving story of loss and a life lived in perpetual uncertainty.

The book begins with the Yokota family’s move from Hiroshima to Niigata, chronicling Megumi’s disappearance and its aftermath, and ending with a heartwrenching appeal to the Japanese government for help. Interestingly, what is most touching about this story is not how Megumi’s fate was tragically altered at the hands of North Korean agents, but rather how her disappearance affected her mother’s life and the life of her family. Stories of missing children are shockingly common in the news today, and of course they capture the hearts of all who hear about them. What it is easy to forget, however, when the trails of evidence have gone cold and the stories have faded from the headlines, is how every day forward is forever changed for those left behind. That Megumi’s life was ruthlessly hijacked is undeniable, but so, too, was her mother’s, whose years since the abduction have been under the control of the North Korean government just as surely as Megumi’s.

Yokota’s memories of her daughter contain the kind of intense detail that can only exist when something has been thought through and examined thousands of times over, and it is easy to imagine her determination to hang on to each tiny bit of memory, knowing that there may be no more. Yokota’s carefully kind tone toward anyone who has ever been involved in Megumi’s case is both moving and somehow painful, as is her painstaking effort to thank every person who has ever helped her or sent her hopeful wishes for Megumi’s return. Her campaign to retrieve her daughter, unwavering even in the face of government resistance, is truly inspirational. Still, what inspires the deepest heartache and outrage in the reader is the loss of Yokota’s own life to a potentially hopeless search. That neither the Japanese government nor anyone else has been able to bring about the return of Megumi or at least determine some clear resolution regarding her fate is maddening, as is Yokota’s powerlessness in the situation.

If there is one unfortunate thing about this memoir, it is that it was originally published in 1999, before North Korea’s admission to the kidnapping, which means much of the information now known about Megumi’s case was not addressed in her mother’s writings. To help bring things up-to-date, Vertical has added a brief note and a multi-page timeline at the end of the book, which includes things like the discovery of Megumi’s marriage in North Korea, and the North Korean government’s claim regarding her supposed death, but the timeline is awkward to follow, and without Yokota’s voice, the information feels empty.

Regardless of its few shortcomings as a written work, North Korea Kidnapped My Daughter is an extremely moving and heartbreaking story that deserves great attention from readers.