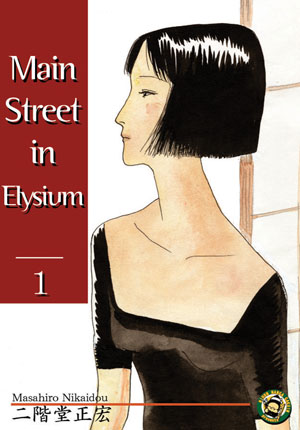 Main Street in Elysium is a four-panel comic strip based on the idea that there is much humor to be found in women’s hatred of their in-laws. There are a few other running jokes (one, for instance, in which a pretty woman observes the mistreatment of a less pretty woman, each time confessing, “I’m glad I wasn’t born ugly”) but the vast majority of the strips concern women who hate their in-laws, often to the extent of becoming homicidal. One woman, for example, keeps her father-in-law outside in a doghouse. She serves him week-old leftovers or scraps from the garbage, and sometimes takes him out for walks on a leash, pointing out important landmarks like the funeral home and the cemetery. Another woman, Noriko, repeatedly attempts to murder her bedridden mother-in-law by means such as strangulation, poisoning, drowning, or pushing her wheelchair off a cliff.

This comic strip has won awards in Japan, but it’s difficult to reconcile that fact with its overwhelmingly mean-spirited tone. None of the in-laws appear to do anything to warrant their treatment. They accept their children’s abuse without complaint (though Noriko’s mother-in-law at least defends herself in order to stay alive), and seem to do little else outside of occasionally asking to go for a walk. There is some humor in the extreme politeness with which they address each other, as well as in the physical extremes to which the women will go in their attempts to do away with their hated relatives, but those jokes get old quickly, leaving the reader with a handful of characters who are just not very likable.

Nikaidou’s art is quirky, fun, and quite expressive at times. Unfortunately, the comic’s dark humor too often misses the mark.