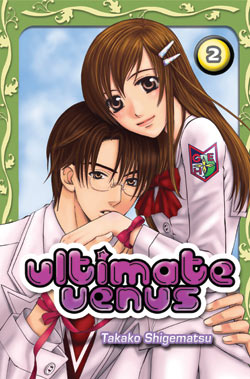 At the end of volume one, Yuzu was left wondering why she’d been saved by her chief rival for the Shirayuki fortune, Iyo Hayashibara. As volume two begins, she and her bodyguard, Hassaku, head to the Hayashibara estate to confront Iyo, and instead find out that he is actually the body double for the real Hayashibara heir who is none other than Yuzu’s close friend, Haruka. Iyo is beaten and tossed out for his betrayal, and is later hired by Hassaku to act as a second bodyguard for Yuzu. Meanwhile, Yuzu realizes that she is in love with Hassuku, though he is careful to keep her at a distance. Things are further complicated in volume three by the introduction of a young filmmaker, Masaya, to whom Yuzu discovers she has been promised in marriage.

Though little more than a silly soap opera on the surface, Ultimate Venus offers some surprisingly rich moments. Yuzu’s private display of grief after discovering that Haruka’s friendship with her was a sham is truthful and touching, as is her distress when she is fooled into believing that Iyo has taken a bullet for her. The story’s constructs are melodramatic and packed with cliché, but underneath it all is a real story of a real girl growing up and discovering what’s important to her. In volume three, once Yuzu decides to be honest about her feelings for Hassaku, she finally begins to show some real confidence in her own strength of heart. Another treat in these volumes is the further development of Iyo’s character, which reveals him to be an unusually perceptive and complex young man.

Volume three ends on a rather dramatic note, as Yuzu determines to stand up to her grandmother, Mitsuko, and refuse the arranged marriage, promising more drama as well as more “screen time” for the stylish, sagacious Mitsuko, whose appearances were notably few in these volumes. Fortunately, with Yuzu’s growing confidence and resolve, Mitsuko is no longer the only strong woman in the series, a trend that will hopefully continue! It is the strength of Shigematu’s characters that allows this series rise above its superficial premise to deliver some genuine insight along with the fun.