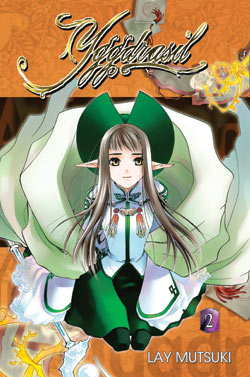 Student Koki Tachibana is a high-level player in the massively popular online roleplaying game, Yggdrasil. All the game’s most popular players are permitted to create a second “avatar” with which to play the game without being bothered by fans. Having retired his original avatar, Phantom, Koki is content pursuing low-level quests with childhood friend Haruna, until someone else hacks into Phantom’s account and turns up in the game.

In the second volume, strange programming glitches are springing up game-wide. The game company challenges players to discover the origin of the bugs, and Koki logs in as Phantom to accept the challenge. As he does, he’s approached by superstar songstress avatar, Teal, who unknowingly reveals herself as the player behind Aoi, a low-level avatar who is a regular on quests with Koki and Haruna.

Because most of the story’s menace exists in a world that is fictional even within the story, the “dangerous” world of Yggdrasil never feels quite real despite the characters’ devotion to the game. Yggdrasil is at its strongest when it focuses on the characters’ “real life” identities and relationships, and how those are affected by the avatars they play. Haruna’s growing crush on Koki, glimpses of the real-life girl behind Teal, and even the game company’s behind-the-scenes politicking are all more emotionally engaging than anything that happens regarding the game itself.

The art has a sketchy style that makes action sequences difficult to follow, but also lends an otherworldly quality to the characters’ online lives that is quite effective. The game’s fantasy element allows mangaka Lay Mutsuki to play with looks from multiple eras in a fun, attractive way, though the story’s “real life” sections could benefit from a simpler style.

Only in its second volume, Yggdrasil‘s potential has just begun to be tapped. It will be interesting to see where the series goes from here.