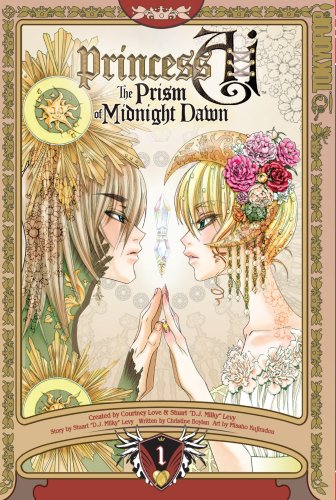 Set after the original Princess Ai series, this story begins back in Ai-land, where Princess Ai is performing in a “prism-cast” concert, simulcast to both Ai-land and Earth, thanks to the power of the magical and mysterious “Prism of Midnight Dawn.” Unfortunately, as the concert begins, the prism (along with prophet Sir Edwin See) is stolen away from Ai-land by a huge vulture, presumably taken to the other side. Princess Ai uses a second prism to transport herself and her bodyguards, the three Furies, back to Earth to rescue Sir Edwin and return the Prism of Midnight Dawn to Ai-land. All is not well on Earth, and Ai soon discovers that much of the population has become addicted to a substance called “Tank,” including her old flame, Kent Kawa Scott.

Like many sequels, Princess Ai: The Prism of Midnight Dawn feels more like merchandising than fiction. The plot and dialogue move along predictably in this first volume. There are a few moments that could be dramatic, if only they were a bit more hard-won. Kent too easily throws aside his Tank addiction in order to make a televised plea to recapture Ai’s heart, and Ai is quickly lured into a trap, leaving her captive at the end of the volume.

The volume contains onstage performances by both Ai and Kent’s band, The Rebel Paupers, but unlike in Ai Yazawa’s NANA, where music provides the soul of the story, here it works as a clunky plot device, with too much time being spent on watery lyrics like, “How far away is never, How soon yesterday. Tomorrow waits forever, And ever three more days.” That said, probably the most enjoyable piece of this volume is the attached Ai-Tunes CD, which offers up songs from various artists such as Skye (who provided the voice of Ai on TOKYOPOP’s Princess Ai Soundtrack) and California bands Divine Madness and Intercept.

Princess Ai: The Prism of Midnight Dawn‘s first volume is prettily packaged and presented, with attractive art and fashions, and may offer fans of the original series more of what drew them there in the first place. On its own, however, it lacks any real drama or substance to bring in new readers.