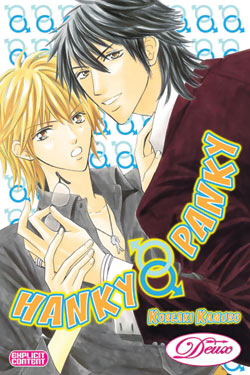 Koreaki Kamuro’s Hanky Panky is a collection of short boys’ love stories, each with the sole purpose of putting good-looking characters in bed with each other. The scenarios created to get them there run from unmemorable to unbelievable. In the first story, for which the volume is named, nerdy college student Manaka runs a host club after hours, and finds himself in a predicament when one of his classmates, Doi, applies for a job as a host. In this case, the plot relies entirely on the reader’s ability to believe that Doi does not recognize Manaka at the club only because Manaka isn’t wearing his glasses. Sorry, but this really only works for Superman.

Other scenarios include a man who runs into the soccer coach he crushed on in his youth, and a romance at an employment agency (entitled, “One Sweet Position”). There are a few touching moments between characters here and there, but overall, things like plot and character development are shunted aside in the rush toward the stories’ true objective: sex.

Even the sex, however, is not particularly well-written or well-
drawn. The sex scenes are all short and very similar. The art, which
is serviceable at best throughout the volume, becomes downright vague during these scenes, and in some of the panels that depict only pieces of the characters’ anatomy, it can be difficult to tell for
sure what’s going on. On the upside, all the sex is consensual, and
the relationships portrayed are mostly healthy and often loving.

The character designs are generally as unremarkable as the stories themselves. All the men are pretty, but generic, and though the stories are completely unrelated to each other, the characters are drawn so much alike, at first it is difficult to tell.

Ultimately, though Hanky Panky fails both as fiction and as pornography, it is too bland to be offensive on either count.