This post is a bit of a mish-mash, which probably reflects the state of my brain after the long weekend. At the moment, I’m thinking a lot about travel. This coming weekend, I’ll be heading to Charlotte, NC to attend the Southeastern Theater Conference auditions on behalf of the children’s theater company I work for. We have quite a few actors to cast for tours starting in January, very serious business, and yet my mind is currently focused on two things:

1) What manga should I bring on the plane?
2) Where does one buy manga in Charlotte, NC?

If you know the answers to these burning questions, please do let me know. Also, I’ve finally purchased my ticket for the New York Anime Festival, so there will be quite a bit of travel for me this month. Thankfully, that is a much easier trip, which also allows me to see old friends in the city, and I certainly won’t have any trouble figuring out where to buy manga. ;)

Speaking of manga, as I’ve mentioned somewhere around here, I’ve been subsisting lately off of what can be found on my local comic shop’s used shelf. They rarely happen to have whatever volume I need next of the many series I’m collecting, so I’ve been reading the first volume in a lot of series. A couple of the series I’ve started recently because of this are Million Tears (which is only two volumes, total) and Zig Zag, both of which I’ll talk about a bit here. 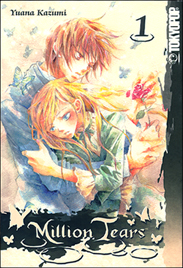 Million Tears (Tokyopop) was an impulse buy. I had never heard of it, but picked it off the shelf anyway, based on the summary on the back.

From Yuana Kazumi, creator of Flower of the Deep Sleep, comes a psychological thriller about a man who may be losing his place in the world… When friends and loved ones begin to disappear, his sense of reality begins to crumble–until the day he runs into a mysterious figure who can erase a person’s very existence…

Gorgeously illustrated and spectacularly twisted, Kazumi-sensei’s dramatic shojo is an unforgettable journey of discovery in a world filled with suspicion and awe.

After I got home, I looked it up online, and immediately began to regret the purchase, as every review I saw was mixed or negative. I actually liked it better than all those reviewers, though, at least by the end of the volume. 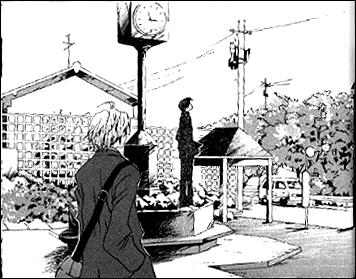 The art is very pretty (though I dislike much of the toning), and characters who seemed wooden and one-dimensional in the beginning really became compelling by the end. The way the timeline is presented is perhaps not as effective as the author might have hoped, as the point in time chosen to begin is not nearly the most interesting part of the story, but for the persistent reader, it does pay off by the end of the volume. By the end, I was even able to swallow the fact that the lead male character’s true name is “Glorious Lily” and that’s quite a feat, when you think about it. I suspect that must read better in Japanese. 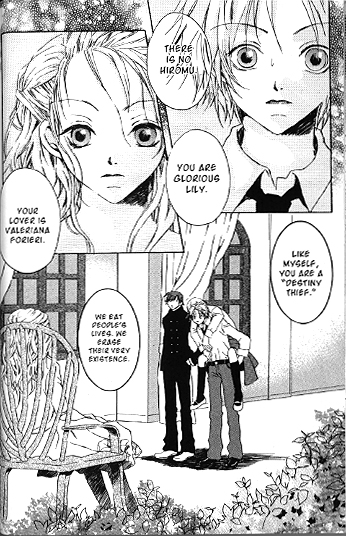 In the end, I suppose what’s telling is that I want to by the next (final) volume, so that I can find out what happens to Glorious Lily and both his human and non-human friends. There are stories I’m much more engaged by right now, but the fact that this wraps up in just one more volume makes it a nice little snack in between richer meals. 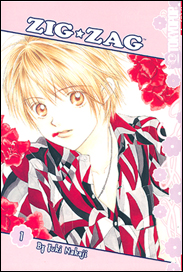 Zig Zag (Tokyopop) has actually been on my list to buy since I’d read Jason Thompson’s review of it in February’s Otaku USA, and I was pretty excited to see volume one on the used shelf where I could buy it. Here’s what the back of this book says:

In a private school only recently open to girls, flower-lovin’ Takaaki is a breath of fresh air! Sure he’s short, cute and often mistaken for a girl. He’s also really into plants and flowers, mostly due to his secret crush, Marika. When Takaaki moves into his new dormitory he and his mysterious, distant roommate Sonoh seem like complete opposites at first. But the two begin to discover that they have more in common than they first thought–and Taakaki embarks on a journey to find out just who is the real Sonoh! From Yuki Nakaji, the creator of Venus in Love!

This is actually a pretty sweet little story, and it’s refreshing to have male characters besides Neville Longbottom who are really into plants. The female characters are compelling so far, and there are even a few interesting minor characters floating around, but this manga suffers from something I hadn’t necessarily expected, which is that too many of the male characters look alike, to the point where I was honestly confused at times who was in the frame. The author also uses those little asides more often than I like, you know, the tiny notes here and there giving us information about the characters or situation that would be better revealed organically through the story, as well as tiny dialogue asides that I tend to find irritating and difficult to read. 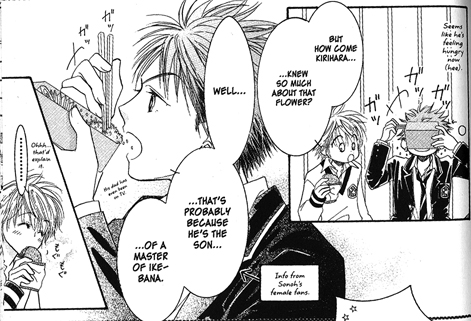 By the end of the first volume, the stories I was most interested in pursuing were the emerging love story between Takaaki and Saho, who are adorable and a wonderful break from usual manga gender norms (she’s into sports, he’s into flowers), and the personal development of one of the secondary female characters, Mei, a quiet girl who is slowly coming into her own. So far, I have very little interest in the whole “who is the real Sonoh?” question, but I expect that will take off more in later volumes. And yes, I will be reading further volumes, despite my little issues with the art and method of storytelling. In the end, who can resist a boy who loves flowers? 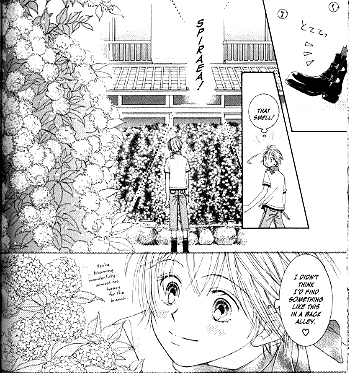