In which I catch up with several series that have recently debuted under VIZ’s Shojo Beat imprint. 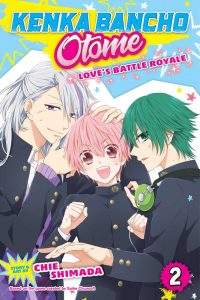 Kenka Bancho Otome: Love’s Battle Royale, Vols. 1-2 by Chie Shimada
Based on the game created by Spike Chunsoft, Kenka Bancho Otome is the frothy tale of Hinako Nakayama, a friendless orphan who is accosted on the way to her first day of high school by her heretofore-unknown twin brother, Hikaru Onigashima, heir to a yakuza family. He’s supposed to be attending Shishiku Academy, famous for its delinquents, but he hates fighting, so he prevails upon Hinako—toughened by her orphan experience—to switch places with him. Once she begins attending Shishiku, she makes friends and has various adventures while becoming the boss of her year and fending off challengers.

I didn’t enjoy this series much, and mostly that is due to how shallow the storytelling is. Now, I realize this manga is based on an otome game, so perhaps I shouldn’t get hung up on the details and just appreciate theoretically hunky guys, but still… a little bit of effort would’ve gone a long way. The most glaring example of missed opportunities is the fact that Hinako never once stops to wonder “Hey, if I had a rich family, including an identical twin, why on earth did I grow up in an orphanage?!” Another drawback was that Hikaru has no redeeming qualities whatsoever and his omnipresent minion is just plain creepy.

Really, the best thing I can say about Kenka Bancho Otome is “at least it’s short.” 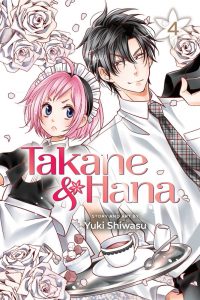 Takane & Hana, Vols. 1-4 by Yuki Shiwasu
When her older sister flakes on an arranged marriage meeting with her dad’s boss’s 26-year-old grandson, sixteen-year-old Hana agrees to go in her place. Takane Saibara is arrogant and critical and is surprised and intrigued when Hana tells him, “I don’t have even an ounce of interest in you.” From then on, he keeps turning up at her house and school, expecting her to cry for joy at his attention and gifts, but little by little he shows his good qualities. Although he’s a successful businessman, he does have an awkward side, and the ease with which Hana is able to push his buttons makes the age difference between them a lot easier to accept.

Over the course of these four volumes, Hana goes from zero interest in Takane to realizing that he’s a reliable, honest person whom she wants to keep seeing, despite the possibility that his career will be harmed by further association with a high-school girl. She hasn’t quite accepted that she has feelings for him, partly because their relationship is so competitive (and tsundere to the max) that admitting such a thing would be a major defeat. Indeed, the final page of the fourth volume depicts a gleefully gloating Takane who has just learned that, in the interest of keeping things simple, Hana has been telling her classmates he’s her boyfriend.

I really like both Hana and Takane a lot, and Shiwasu-sensei does great things with their facial expressions, particularly how Hana can be all smiles one moment and then blank the next (as she delivers the latest blow to Takane’s ego). Takane in smirk mode is fun, but I love the palpable sense of relief that emanates from him when he’s able to relax and just be himself around Hana. It’ll probably take a very long time for these two to get together, but if the road there is going to be this entertaining, then I’m in for the long haul!

Takane & Hana is ongoing in Japan; volume twelve comes out there later this month. VIZ will release the fifth volume in English tomorrow. 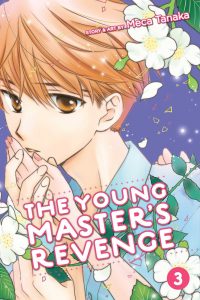 The Young Master’s Revenge, Vols. 1-3 by Meca Tanaka
As a child, Leo Tachibana was encouraged to befriend Tenma Tsuwabuki, the daughter of wealthy department store owners. She was a tomboy and frequently involved him in her escapades, which culminated in an incident where he fell into a turtle pond and was bitten on his butt by a pair of turtles, leaving scars that have become the symbol of his burning hatred for Tenma. Newly returned to Japan after living abroad for ten years, Leo is determined to get his revenge by making Tenma fall for him and then rejecting her. Yes, our hero has spent a decade obsessing over this plan all because some baby turtles chomped his butt checks.

Initially, Leo has a bunch of inner monologues about how he’ll discard Tenma like a used rag or shatter her heart to pieces, but at the same time he’s protecting her and helping her out. The Tsuwabuki store has gone bankrupt, so when the relatives she’s living with pressure her into an arranged marriage, Leo rescues her and provides her a place to stay. When she’s ostracized by her rich classmates, it’s Leo who eats lunch with her every day. Soon, Tenma learns that Leo holds her responsible for his turtle trauma, and she’s willing to let him torment her as a form of atonement. Of course, it’s obvious that he loves her, but it takes him a while to acknowledge the fact. After that point, he’s got to try to undo all the damage he did previously and try to convince Tenma he no longer has any intention of hurting her.

Leo is not especially endearing as a character, but to his credit, I will say that he very much supports and respects Tenma’s goal of becoming a veterinarian. Tenma is much more likable, being positive and dignified and with a clear-eyed goal in mind. I also liked the little subplot wherein the sheltered rich girl develops skills like cleaning house and understanding the value of money.

Ultimately, The Young Master’s Revenge is one of those shoujo series that has some truly ludicrous moments and one-note recurring characters but is somehow captivating enough to make one want to complete the series.

The Young Master’s Revenge is complete in four volumes. The final volume is due in December.