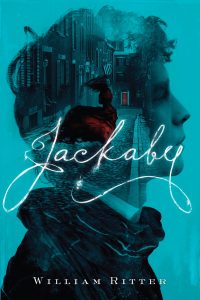 Jackaby
I’ve seen this series described as “Sherlock meets Doctor Who,” and that is pretty apt. It’s January 1892 and our plucky British narrator, Abigail Rook, has just arrived in New England and needs employment. No one is hiring except for the eccentric investigator, R. F. Jackaby, who is looking for a new assistant since his previous one is “currently waterfowl.” Jackaby’s physical description is evocative of Benedict Cumberbatch in character as Sherlock, and he’s occasionally tactless, but aside from one early demonstration, he doesn’t do much in the way of deduction. Instead, he’s more like The Doctor—a kooky, scarf-wearing fellow who dashes about warning townspeople of supernatural threats while they regard him as “a crackpot imbecile.” Abigail is, of course, the companion—a clever girl who has always longed for adventure but who has until now been denied it. Happily, there is no hint of romance between them.

In this first installment, Abigail and Jackaby work together to solve a series of murders afflicting a particular apartment building. Jackaby, of course, can tell the culprit is a creature of some sort while the policeman in charge scoffs at this assertion and, at one point, locks Abigail and Jackaby up for impeding his investigation. Although I liked the characters—especially Jenny Cavanaugh, the ghostly resident of Jackaby’s headquarters—the mystery portion of the book was sadly predictable. “Obvious culprit is obvious,” I wrote in my notes, and though I didn’t work out what sort of creature was to blame, another character’s bestial secret was no surprise.

Still, I did enjoy Jackaby and like the characters and tone well enough to continue. I do hope the next mystery is a little less transparent, though. 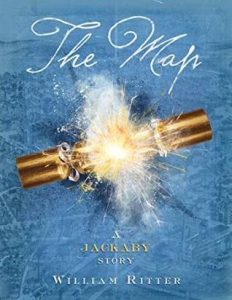 “The Map”
This short story takes place on Abigail’s birthday. She’s been quite clear about not wanting a fuss, but Jackaby is determined that they will have an adventure. Their first stop is a magical market, which she doesn’t enjoy much, to Jackaby’s disappointment. While there, however, they pick up a treasure map and proceed to complete a series of challenges in search of the treasure buried by the notorious rogue, the Bold Deceiver.

“The Map” may not be an essential piece of reading, but it was enjoyable nonetheless. I especially liked the challenge in which they must get past the enormous hare guarding a castle—that one was sad and funny simultaneously. I also like that they’re not 100% successful with all the tasks, since centuries have passed since they were set up. On the whole, it’s worth checking out. 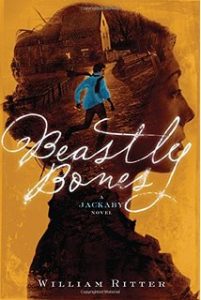 Beastly Bones
It’s now the spring of 1892 and Jackaby and Abigail have been sent to the nearby town of Gad’s Valley to investigate thefts from a paleontological dig site. Abigail is mad for fossils, so is very excited about this prospect, while Jackaby must be convinced it’s worth their time. Another benefit is that Abigail gets to spend more time with Charlie the handsome policeman, for whom she has feelings, though she’s unsure what to do about him. Jenny the ghost has advised her to go for it and make the first move while Nelly Fuller, intrepid lady reporter, chastises her for thinking about love. “Do you want to be safe and happy or do you want to be great?”

As I had hoped, the mystery in Beastly Bones is a definite improvement over the first book; despite being a fine example of Chekhov’s Gun, its multiple layers made for a more complex case. Mostly, however, I liked that one aspect of it remains unsolved. Even though this series has Sherlockian elements, it hadn’t occurred to me that there’d be a Moriarty equivalent, but it looks like there is!

Still, the characters remain the main draw. Jackaby can be brash and insulting, but he doesn’t talk down to Abigail or treat her like a kid. I enjoyed his aversion to hearing about her romantic problems, and his awkward attempts to be sweet. “Buck up; you’re dreadful company when you’re melancholy.” Abigail continues to be resourceful and likable. And though there wasn’t much of Jenny, the ending finds her enlisting Jackaby to delve into her own murder. I’m very much looking forward to it! 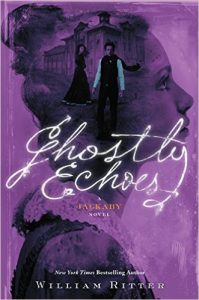 Ghostly Echoes
I’d really been looking forward to Ghostly Echoes and the truth behind Jenny’s murder, but it wasn’t exactly what I’d been hoping for.

True, Jenny’s murder is solved, but there is practically zero exploration of the person she was when she was alive. The plot is more about the evil council responsible (turns out that Moriarty-seeming character from previous books was only stirring things up to keep Jackaby busy so this group of dark fae could keep an eye on him) and the looming threat to mankind. Jenny did grow tremendously in both confidence and ability, and had a few genuinely badass moments in which she got to save her friends. I also appreciated her realization that she is more than a mere echo of the girl who died, but has her own thoughts and feelings. “I’m my own somebody.” I liked all of that, but I still wish she’d been the focus throughout instead of only in places.

Too, there’s not really much Jackaby, either. Yes, we learn about his childhood friend who was the Seer before him and how the council was after her too, but he just seems so… deflated. I guess it’s reasonable for him to be subdued given the case and its implications—he was worried that closure for Jenny might mean she’d move on—but I missed the humor he used to bring to situations. I reckon there shan’t be much of that in the next volume, either, in which our heroes face off against the bad guys and attempt to save the world. 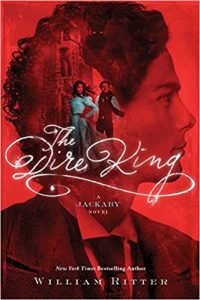 The Dire King
The final entry in the Jackaby series wasn’t bad but, like the previous installment, certain character moments that I really wanted to see play out were completely glossed over.

There was at least more Jackaby here, and a somewhat warmer one, which I appreciated. I just wish there was much more about him and Jenny. She’s finally able to overcome her inability to touch him when his life is on the line, and there’s the suggestion that they’re going to live happily ever after once the crisis has been averted, but man, I really wish we’d gotten a scene where he pours his heart out and she scolds him for taking so long while also crying happily. Similarly, while I like where Abigail ultimately ends up, the very end is briefly pretty great but then it’s just… over.

I know cheesy epilogues get maligned pretty often, but in this case I would’ve appreciated one!