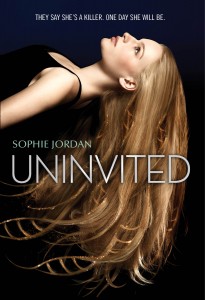 book description:
When Davy tests positive for Homicidal Tendency Syndrome, aka “the kill gene,” she loses everything. Once the perfect high school senior, she is uninvited from her prep school and abandoned by her friends and boyfriend. Even her parents are now afraid of her—although she’s never hurt a fly. Davy doesn’t feel any differently, but genes don’t lie. One day she will kill someone.

Without any say in the matter, Davy is thrown into a special class for HTS carriers. She has no doubt the predictions are right about them, especially Sean, who already bears the “H” tattoo as proof of his violence. Yet when the world turns on the carriers, Sean is the only one she can trust. Maybe he’s not as dangerous as he seems. Or maybe Davy is just as deadly.

Review:
We meet Davina (Davy) Hamilton in March 2021, when she is about to graduate from her prestigious prep school and proceed on to Juilliard. Davy is a special snowflake musical prodigy who is also gorgeous, with a studly boyfriend many other girls covet. She’s also not shy about congratulating herself for these things.

Her privileged existence comes to an end when routine screening reveals that she carries the gene for HTS—Homicidal Tendency Syndrome. She is promptly uninvited from her swanky school and sent to a class for “carriers” at the local public school, where some of the kids are obviously creeps but others seem as normal and harmless as Davy insists she is. Carriers are treated poorly by society, and when an angry group of them perpetrates a mass shooting, all carriers are rounded up and sent to detention camps. Davy and a couple of classmates, however, are diverted into a program where they train to kill on government command.

While there were a few things I liked about Uninvited, I must admit that it was not especially good. Original-flavor Davy is not a sympathetic character, but she does eventually realize that she used to be a pretty crappy person and that her friends and boyfriend never truly cared about her. I also found the repeated references to music in her head puzzling—as a musician myself, it’s true that I usually have a song (or at least unformed noodling) in my head, but I thought this was normal for everyone, and not a sign of genius as we are evidently supposed to believe here.

Too, the writing is sometimes weirdly choppy, and I’m not sure what the point of that was. Is it simply bad writing or is it an attempt to convey how grim the situation is? If that’s the case, why use it during a scene where Davy’s boyfriend seems to accept her, kill gene and all?

That’s just one example. I confess that I eventually started internally reading these in a flat robot voice to amuse myself. Jordan sometimes seems to mix up musical terms, too, like when Davy refers to the “pitch” of an aria, or that her body sways to the “harmony.” Plus, there were two instances of “y’all” being spelled “ya’ll.” Can you become an editor without understanding how contractions are formed? Apparently, at Harper Teen you can!

So, irritating main character, bizarre writing style… what is there to like? Well, the concept itself is kind of interesting, and because I didn’t particularly care about anyone, their misfortunes didn’t cause me any anxiety. The portion of the novel set in the training program is the strongest, with Davy becoming determined not only to become strong in her own right, but buying into the claim that if she does well enough, the government will have the neck tattoo proclaiming her as a violet carrier removed.

In the end, I find myself interested enough to read the sequel, Unleashed, though I am very grateful that this series is not a trilogy.