And the winner of the Tokyo ESP manga giveaway is… AshLynx!

As the winner, AshLynx will be receiving the first omnibus in Hajime Segawa’s manga series Tokyo ESP as published in English by Vertical Comics. Tokyo ESP is a relatively recent example of a manga that’s about psychics and espers. The subgenre doesn’t seem to be quite as common as it once was in translation, but it’s certainly still around. And so for this giveaway, I asked that participants tell me a little about their favorite espers and psychics from manga. Mob from Mob Psycho 100 was mentioned the most frequently (I really hope an English-language publisher will license that series soon!), but there are other really great characters mentioned in the giveaway comments, too!

That’s quite a list, and I’m certain that’s not all of the manga with psychics and espers to have been released in English. Even so, I think there’s a nice variety of genres and even types of psychics represented, and you’ve got to start somewhere. Thank you to everyone who participated and shared your favorite espers with me. I hope to see you again for the next giveaway!

The end of February is almost here which means it’s yet again time for another giveaway at Experiments in Manga. This month everyone will have the opportunity to win the first omnibus of Hajime Segawa’s manga series Tokyo ESP. (Published in English by Vertical Comics, the omnibus collects the first two volumes of the original Japanese edition.) As always, the giveaway is open worldwide!

Growing up I absolutely loved stories about psychic powers. (Did anyone else read The Girl with the Silver Eyes Willo Davis Roberts? That was a favorite of mine and I frequently reread it.) I no longer deliberately seek out that particular subgenre in the same way that I used to, but I do continue to enjoy stories with ESP as a prominent feature. At one point in time, it actually seemed like it was impossible to get away from manga series revolving around characters with psychic powers. While they don’t seem to be nearly as common as they once were, manga with psychics and espers are still regularly released in English, Tokyo ESP being just one example

So, you may be wondering, how can you a copy of the first Tokyo ESP omnibus?

1) In the comments below, tell me a little about one of your favorite psychics or espers from a manga. (If you don’t have a favorite or don’t know of any, simply mention that.)
2) If you’re on Twitter, you can earn a bonus entry by tweeting, or retweeting, about the contest. Make sure to include a link to this post and @PhoenixTerran (that’s me).

That’s pretty straightforward, right? Everyone participating has one week to submit comments and can earn up to two entries for the giveaway. Comments can also be sent directly to phoenixterran(at)gmail(dot)com if needed or preferred. Those entries will then be posted here in your name. The giveaway winner will be randomly selected and announced on March 1, 2017. Good luck, everyone!

Last week at Experiments in Manga, I announced the World Trigger Giveaway Winner. As usual for such announcements, the post also includes a thematic list of manga. In this case, I’ve put together a list of some of the manga licensed in English that feature parallel worlds, dimensions, and universes. Speaking of which, last week I also reviewed the first volume of a series that was included on that list–Shuji Sogabe’s Persona 4, Volume 1. I haven’t played any of the Persona 4 video games yet, but the manga adaptation is off to an intriguing start. I’m looking forward to reading more, and I’ll likely give the anime a try as well.

I found quite a few interesting things to read last week. Frederik L. Schodt (whose work I greatly admire) wrote about translating manga for World Literature Today. ICv2 has been busy interviewing folks from the North American manga industry, including a two–part interview with Viz’s Kevin Hamric and another two–part interview with Dark Horse’s Michael Gombos and Carl Horn.

There have been a few interviews with manga creators posted recently, as well. Manga Brog translated an interview with Tsutomu Nihei from earlier this year. Kazuo Koike participated in a Reddit Ask Me Anything. And Kodansha Comics has a new creator interview with Chuya Koyama, the mangaka of Space Brothers. Related to that interview is an autograph sweepstakes and survey about Space Brothers which is a great opportunity to let Kodansha know if, like me, you’d be interested in seeing a print release of the series.

In licensing news, Seven Seas slipped in an announcement for Kanekiru Kogitsune and Kobayakawa Haruyoshi’s Re:Monster manga adaptation. There’s also currently an Indiegogo campaign to add an English dub to and generally improve the quality of the upcoming North American DVD and Blu-ray release of the Skip Beat! anime adaptation.

A Bride’s Story, Volumes 6-7 by Kaoru Mori. Every time I pick up A Bride’s Story I can’t help but be impressed by Mori’s stunningly detailed and beautiful artwork. The manga is gorgeous to look at, but the storytelling is lovely as well. These two volumes fall at the opposite ends of the spectrum when it comes to tone, but they’re both still wonderfully engaging. Though it has its quiet moments, the sixth volume is dominated by exciting action sequences and battles as Amir’s original clan struggles to find a way to survive now that it has lost access to grazing lands. The intensity of the sixth volume isn’t found in the seventh, but there’s still plenty of drama as the series shifts to follow more of Mr. Smith’s journey. The story itself focuses Anis, a young Persian woman whose husband is quite wealthy. Because of this she leads a somewhat lonely and secluded life until, at the urging of her maid, she starts going to the public baths where she can spend more time with other women. (Much of the volume takes place at the baths, so there is a fair amount of tasteful nudity.)

Tokyo ESP, Omnibus 1 (equivalent to Volumes 1-2) by Hajime Segawa. It took me a couple of chapters to completely warm up to Tokyo ESP, but by the end of the first omnibus I was completely engaged. Segawa’s artwork doesn’t particularly grab me, but I’m immensely enjoying the quirkiness of the manga’s characters and the weirdness of its story. Tokyo ESP is ridiculous in a good sort of way. One morning, Rinka wakes up to discover that she has the ability to pass through physical objects. She’s not the only Tokyoite to have suddenly gained strange superpowers, but Rinka does appear to be one of the few to try to use her newfound skills for justice rather than personal gain. Though reluctant at first, wishing that she could just go back to normal, Rinka is quite capable and soon finds herself caught up in gang war fighting other espers. Tokyo ESP is a violent, action-packed series with a goofy sense of humor. Rinka can literally kick ass, but she also gets her fair share of beatings. The manga can actually be surprisingly brutal at times.

The World’s Greatest First Love: The Case of Ritsu Onodera, Volumes 1-3 by Shungiku Nakamura. I know quite a few people who we extraordinarily pleased when SuBLime announced that it would be releasing The World’s Greatest First Love. It was their enthusiasm that led me to giving the manga a try–I had read and even enjoyed parts of Nakamura’s earlier series boys’ love series Junjo Romantica, but overall I wasn’t especially enamored with it so I wasn’t necessarily intentionally seeking out more of the creator’s work. But I will admit, so far I am consistently amused and entertained by The World’s Greatest First Love even if I am more interested in the series’ hilarious (and I’m told accurate) portrayal of the inner workings a shoujo magazine than I am in any of the manga’s dubious romances. The World’s Greatest First Love works best for me when it’s a bit over-the-top and not trying to be taken too seriously. Though the anatomy of the characters can occasionally be rather awkward, Nakamura excels at reaction shots and the artwork is well-suited for a comedy.

The theme of this week’s column: New(ish) Titles from Vertical Comics. Up for review: The Complete Chi’s Sweet Home, an omnibus treatment of Konami Kanata’s beloved cat comic, and Tokyo ESP, a new series about mutant teens with superpowers who want to save the world. 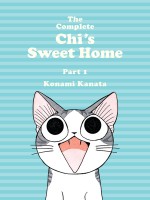 The Complete Chi’s Sweet Home, Part One
By Konami Kanata
No rating; Suitable for all ages
Vertical Comics, $24.95

When I first reviewed Chi’s Sweet Home in 2010, I described it as “a deceptively simple story about a family that adopts a wayward kitten.” I argued that “Chi is more than just cute kitty antics; it’s a thoughtful reflection on the joys and difficulties of pet ownership, one that invites readers of all ages to see the world through their cat or dog’s eyes and imagine how an animal adapts to life among humans.”

Revisiting Chi’s Sweet Home five years later, I stand by my original assessment. I still found Chi’s behavior adorable — or should that be adowable? — and her family’s amused and exasperated reactions true to my own experiences as a cat owner. At the same time, however, I appreciated the opportunity to read more of Chi’s story in one sitting, as Konami Kanata does a fine job of recreating the day-to-day rhythm of living with a kitten or puppy, from the obvious — accidents, clawed furniture — the to subtle — mastering the art of jumping onto a table or chair, examining strange new objects. As an added bonus, the Complete edition includes a sprinkling of chapters from Kanata’s first big hit, FukuFuku: Kitten Tales, and a larger trim size that gives Kanata’s playful, charming watercolors more room to breathe.

The verdict: Chi is an indispensable addition to any animal lover’s bookshelf. Look for Part Two (which collects volumes 4-6) on January 16, 2016.

On paper, Tokyo ESP sounds like The X-Men or The Fantastic Four: a group of Tokyo residents begin manifesting cool new powers — teleporting, walking through walks — after exposure to a supernatural phenomenon. Some ESPers embrace the criminal possibilities of these gifts, while others vow to use them for good, pitting the two groups against each other in epic fashion.

Perhaps mindful of the similarities between his creation and Stan Lee’s, Hajime Segawa makes a game effort to individualize his creation with an abundance of quirky details: a flying penguin sidekick, a night sky filled with glowing fishes. As a result, long stretches of Tokyo ESP feel more like a spaghetti-throwing exercise than genuine world-building; the reader is never certain if there’s an underlying logic that would explain what we’re seeing, or if Segawa is making it up as he goes along. By the end of volume one, you may remember the flying penguin more clearly than anything that actually happened in those first nine chapters, as the plot is standard shonen fodder: super-powered teens saving the world.

The verdict: Your mileage may vary; some readers will undoubtedly find the sleek character designs and out-of-left-field plot developments appealing, while others will find the storytelling too frenetic to be engaging.

Reviews: Sean Gaffney takes a fond look at the final volume of Oh! My Goddess, which arrived in stores this week. Over at Comics & Cola, Zainab Akhtar reviews the fifth and final volume of Taiyo Matsumoto’s bittersweet Sunny.