the palette of 12 secret colors

With the latest Manga Moveable Feast well underway (hosted this month by the crew at the School Library Journal’s Good Comics for Kids), Michelle and I take a look at books from Yen Press, Viz Media, Del Rey Manga, and CMX. Enjoy! 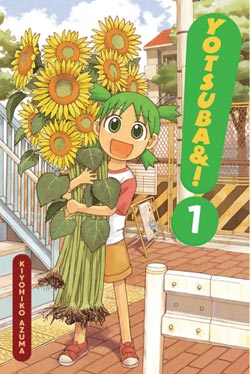 MELINDA: So, it’s another Manga Moveable Feast week here at Off the Shelf! The object of the Feast is a bit different this time around. Though the primary title chosen for discussion is Kiyohiko Azuma’s Yotsuba&! (Yen Press), we’re also offered the opportunity to talk about some other titles that are being marketed for kids, either here or in Japan (and perhaps both).

What I’m most interested in is probably the question of why Yotsuba&! is recommended for kids here, though it’s published for adults in Japan, while some other titles are rated much higher here than they are over there. But I suspect you might have your own agenda too. Am I right?

MICHELLE: Well, no, actually. I’m still happy from my seven-volume binge and hung up on how awesome Yotsuba&! is. I haven’t really gotten beyond that yet. So, what I’m saying is I’ll happily be swept along by your agenda. :)

MELINDA: Well, okay! Let’s start with Yotsuba, then. For those who don’t know, Yotsuba&! is a slice-of-life series that chronicles the daily adventures of Yotsuba, a green-haired five-year-old who lives with Koiwai, her youngish adoptive dad, and who approaches everything in life with a sense of true wonder and (frequently) an earnest lack of understanding. Over the course of the series, she is introduced to everyday concepts like air-conditioning and cake, each more wonderful than the next….