so cute it hurts!

So Cute it Hurts! Volume 3 by Go Ikeyamada

This is an excessively silly series, but I’ve been enjoying it, mostly because of the amount of plot twists that get resolved in each volume, so more goofy subplots can promptly develop. Also, I feel like Shojo Beat should always be publishing at least one title where the heroine cross dresses just on principle.

I feel like in many shoujo series, the fraternal twins’ cross dressing antics would fuel plot lines for 4-5 volumes, but in So Cute it Hurts! their true identities were unmasked at the end of the second volume. Aoi, the delinquent boy with a crippling physical aversion to female contact is surprised when the boy he’s been hanging out with is unmasked as Mitsuru’s sister Megumu. At the same time, Mitsuru’s masquerade is uncovered by mean girl Azuza. Aoi deals with the psychological impact of being around a girl unknowingly, and Azuza blurts out a confession of her crush to Mitsuru instead of revealing his secret. Meanwhile, Mitsuru is struggling with his feelings for Shino, but doesn’t want to ruin their friendship by telling her that he’s actually a boy. Oh, the tangled storylines of cross dressing shoujo romance!

When the week-long switch ends after Megumu has taken Mitsuru’s tests for him, there’s still plenty of emotional fall-out as Megumu pines for Aoi, and he begins to come to terms with his own feelings. Aoi’s allergy to girls causes some hilarious reactions when he and Megumu get closer, although they have to stay a certain distance apart to avoid triggering him. Their budding romance is indeed ridiculously cute, and while this manga in no way approaches both the hilarity and emotional depth of My Love Story!!, it is still entertaining. Ikeyamada ratchets up all the emotional reactions of her characters for added hilarity. While this volume focused a bit more on Megumu, I can see how the next volume is going to be focusing more with the love triangle Mitsuru is in since the object of his affections does not even know him as a boy while Azuza continues to have a violent crush on him. So Cute it Hurts! continues to be a fun read for those who enjoy romance with broad comedy. 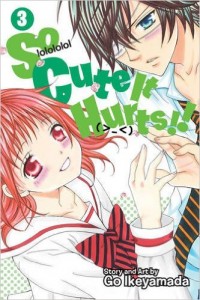 My biggest complaint with the first volume of So Cute it Hurts!! was that I thought it focused a bit too much on boy twin Mitsuru’s adventures cross-dressing as a girl, without as much character development or action for his sister Megumu pretending to be her brother at a school largely populated by juvenile delinquents. I was happy to see that in the second volume Megumu gets a larger chunk of the story.

One of the things that I’ve enjoyed in Ikeyamada’s series so far is that the plot moves fairly fast. Developments that might take at least a two volumes to be explored in another series are quickly resolved, only for even more complications to pop up. Also, many of the issues that the characters have are so ridiculous, I find it extremely entertaining. Megumu pretending to be her brother grows closer and closer to head one-eyed delinquent Aoi Sanada, who turns out to have a deadly Achilles heel involving female company. If he so much as touches a girl, he immediately feels faint and sick. It is to Megumu’s credit that as soon as she finds this out after indulging in fantasies about revealing her true gender and confessing her love to Aoi, she vows to just remain at his side as a male because she doesn’t want to burden him by making him deal with her as a girl.

In the first volume there’s a hint that the deaf girl that Mitsuru likes, Shino and Aoi know each other. This is promptly explored in the second volume, continuing with the plot moving along quickly. Most of this volume will be very familiar to Hana Kimi fans, as Megumu’s natural cuteness shines through her boyish disguise, causing her classmates and Aoi in particular to experience odd feelings. Even though the romances in So Cute it Hurts!! are absolutely silly, there are a few sweet moments where it is clear that twins really do care about the objects of their affection. Overall, I was happy to see the additional character development I was hoping for and while So Cute it Hurts!! is not in any way profound, it is a nice brain candy type manga series.

So Cute it Hurts! Volume 1 by Go Ikeyamada

There has been a gap in cross-dressing shoujo series in the current shoujo beat line up recently, so I was intrigued by this series, which features both cross-dressing twins and juvenile delinquents.

The twins in this series are a pair of fraternal twins named Megumu and Mitsuru. Megumu is devoted to history simulation games featuring historical figures with eye patches, and has found a small group of kindred otaku spirits at her all-girls school. Mitsuru has a much more casual approach to studies, a bit of a womanizing personality, and a penchant for fighting thanks to his attendance at an all-male school crawling with juvenile delinquents. Megumu and Mitsuru are an odd kind of opposite gender fraternal twins that might only exist in manga or k-dramas due to their identical appearance that allows them to swap identities. Mitsuru is struggling with make up work in history and proposes a week long switch to Megumu so she can take his tests for him. Megumu is not thrilled with this idea, but she finds herself going along with it when she wakes up one day to find that Mitsuru has stolen her uniform and left his clothes behind.

This volume focuses a bit more on Mitsuru’s undercover operation at Megumu’s school. He is taken aback when he realizes that the girls he usually relates to in superficial ways actually have personalities, and is particularly surprised when he sees the most beautiful girl in the school bullying a deaf student. He has a blunt way of relating to girlish clique problems, and promptly develops a crush on Shino Takenaka, actually deciding to study sign language on his own so he can communicate with her. The bullying plot is a bit standard for a shoujo manga, but it was nice to see Mitsuru deal with mean girl antics with refreshing directness, and when his enemy attempts to shun him, all the otaku girls band together and are not particularly concerned at any loss of social status.

Megumu’s storyline is a bit less dynamic, and more reliant on shoujo plot cliches where she accidentally stumbles into the embrace of Aoi Sanada, the eyepatch-wearing top delinquent at her brother’s school. Aoi is a bit annoyed and bemused at the sudden appearance of an underclassman who seems to not follow the usual social conventions at their school. Her habit of tripping does actually come in handy when she finds herself in the middle of a schoolyard brawl. So far, Megumu and Aoi aren’t given as much page time or character development as Mitsuru and his new friends, and I hope this gets balanced out a little bit in future volumes.

I found it amusing that towards the end of the chapters, there were over-the-top summations of love standing in stark contrast to the gender-bending comedic hijinks in the rest of the manga. Ikeyamada’s art is attractive, if a bit generic, but she portrays the action scenes and the highs and lows of teenage emotions with ease. I found this volume amusing, and there were some interesting hints of a love quadrangle developing that I’m guessing will be explored more in the next volume. So Cute it Hurts! might not have very much depth so far, but the first volume seems like a nice comedic addition to a summer manga reading list.