A party in the park with our favorite maids!
Bits & Blips: Manga Bookshelf Edition 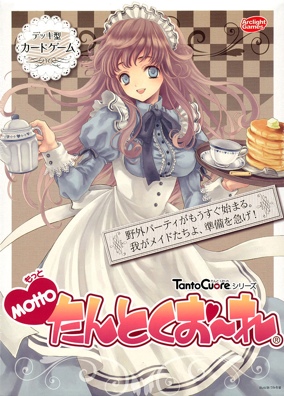 The maids are back, and this time they’re getting ready for a party! If you’ve read my review of Tanto Cuore (and if not, I suggest you do so now if you aren’t familiar with the game) then you know that I was pleasantly surprised by it. Motto Tanto Cuore by Arclight Games brings back some familiar faces along with some new ones, and introduces a mechanic that once again brings a new twist to the deck building genre. I won’t go into too much detail with what hasn’t changed and will instead focus on the changes and additions. 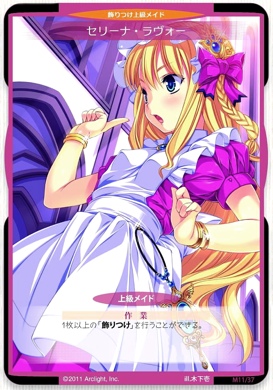 Motto Tanto Cuore has a new group of maids called the High Class Maids and a new type of card called Preparation Cards which come in three types: Decorations, Food, and Cleaning. The Preparation cards are strictly victory point (VP) cards that players are trying to acquire during the game. There is also a “first master” card which will be given to the start player (chosen randomly) at the beginning of the game. These cards, along with ten of the thirteen general maids and the 1, 2, and 3 love cards make up the “park.” The general maids and the love cards are all considered “staff.”

The general maids have a new “skills” section on them with varying amounts of Concentration (Con), Effort (Eff), and Ingenuity (Dev). Why is ingenuity “Dev”? I used some online tools to translate the Japanese characters in that box and while Google Translate comes up with “Device,” other Japanese-to-English specific sites came up with different things such as imagination and ingenuity. Thematically, “ingenuity” made more sense to me than “device” so that’s the translation I used, while I suspect the publisher chose “device”. It doesn’t really matter much since you will mostly be concerned about matching the skills on the maids with the requirements on the Preparation cards.

In turn order, starting with the player who has the “first master” card, each player will select one of the nine High Class Maids. These maids each have a special ability that will take effect at the start of a player’s turn. Three of these maids are linked to obtaining Preparation cards, and one of them allows the holder to take the “first master” card from the player who is currently holding it. The remaining maids offer special abilities such as gaining additional servings, employs, callings, or love. One of them lets you return a “1 love” card to the park, useful for thinning out your deck. 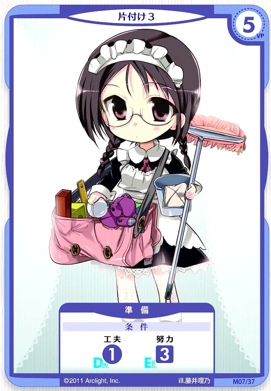 Once everyone has selected a High Class Maid, the players begin their turns again starting with the player who holds the “first master” card. First, the High Class Maid’s special ability (if she has one) takes effect. Next is the “Serving phase” where the player will use “servings” (actions) to play cards from her “side” (hand). The next step is a new phase called the “Work phase.” In this phase, players will gain Preparation cards. In order to gain a Preparation card, the following requirements must be met:

If the conditions are met, then the player takes the top Preparation card from the pile that she qualified for and places it in her house (not in the deck). There is no limit to how many Preparation cards may be gained on a turn provided the player can meet the skill requirements for the next card. The Preparation cards get more valuable as the pile is depleted, but the costs get steeper.

Players now have an opportunity to “employ” (buy) new staff. Any new staff is placed in the “kitchen” (discard pile). Finally, the High Class Maid is returned to the park and the “Cleanup” phase is executed. Play now passes to the next player. At the end of the round, whoever is now in control of “first master” card will be the new start player.

Play continues until two of the general maid piles or one of the Preparation card piles have been depleted. When this happens, the current round is finished. Once all High Class Maids have been returned to the park in this final round, the game is over.

Once again, an incredible number of Japanese artists were brought in to design the cards. There isn’t much new to say here about the art that I didn’t already mention in my review of Tanto Cuore. Some people will like the art, some will hate it, and some will probably just ignore it. I like most of the new cards, although like before there are one or two that push up against my own personal taste boundaries, but none that outright offend me. 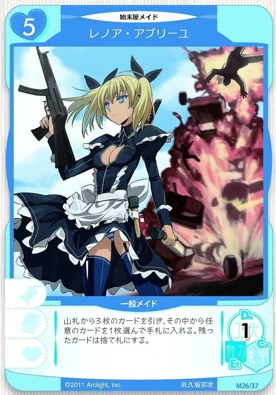 No one messes with the Hitmaid!

Is it different enough?

While some of the mechanics are the same, the introduction of the High Class Maids and Preparations gives the game a very different feel from the original. You have just five cards in your hand when you have to choose your High Class Maid. Do you have all the servings and skills you need to get a Preparation card? If so, then take the corresponding High Class Maid—unless someone else already did! If not, is it possible for you to draw the cards you need this turn? Is it worth the risk of taking a High Class Maid you might not ultimately get to use if you don’t draw the right cards? Or maybe you think you’ll have the right cards next turn, and you should get that “first master” card so you don’t miss out.

Points are a lot more scarce in Motto Tanto Cuore. You need to get those Preparation cards. Sure, there are other ways to get points, either from high cost general maids or with chamber maids as in Tanto Cuore, but not as easily. In this game, building a deck that will get you the right skills at the right time is critical. That’s not to say a deck that generates a lot of love (enabling you to buy those high cost maids) couldn’t be a winning strategy, but I have yet to see that play out.

Can I use cards from Tanto Cuore and its two expansions?

Yes! You can add any combination of 10 Private maids, the Illness and Bad Habit cards, and/or a single pile of 10 random maids from any Tanto Cuore set to create an 11th pile of general maids. The old games can expand the new one; I think that’s pretty slick.

Although there are instructions for two and three player games which involve removing some cards, this game will play the best with four players. With two players, there’s rarely any competition for the High Class Maids. I played it this way and enjoyed it, but games with more players were far more interesting. If you’re looking for a good two player game, I would stick with the original.

Also, we did notice that if one player manages to snatch up most of the Chiffon Loudenne general maids, that player’s ability to generate Effort became really powerful, making it pretty easy to grab the cleaning Preparation cards and run away with the win. My current thought is “don’t let that happen”, but that means one pile is going to get depleted rapidly in almost every game, since she’s an inexpensive card and you need three of her to really see her full potential.

Overall, I’m very happy with this new take on Tanto Cuore. The role selection mechanic and new VP cards make for some different choices and strategies that I enjoy a lot. However, it probably won’t hit the table as often as Tanto Cuore, simply because it’s easier for me to find one or two players who are willing to play than it is to find four, and this game really shines with four.

An important note: Currently, this game does not have an English publisher, so it is only available in Japanese. Cardhaus games specializes in Japanese boardgame imports and you can get this one as well as many other Japanese-only titles there. You can find translated rules and cards on BoardGameGeek. All translations were provided by the magnificent Simon Lundström to whom I owe a great deal of thanks for his tremendous work.