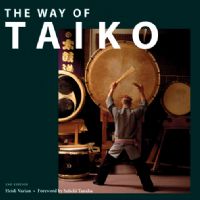 There are very few books available in English that are devoted to taiko–Japanese drums and drumming. In fact, there are only two that I know of: Heidi Varian’s The Way of Taiko and Shawn Bender’s Taiko Boom: Japanese Drumming in Place and Motion. Out of these two works, it was The Way of Taiko that first addressed the subject in depth. Originally published in 2005, by the time that I seriously started studying taiko a few years ago The Way of Taiko was already out of print and my dojo’s copy of the book was literally falling apart. And so, I was extremely pleased to learn that Stone Bridge Press was releasing a second edition of The Way of Taiko in 2013. In addition to Varian’s main text, the volume also includes an extensive glossary by David Leong and a foreword by Seiichi Tanaka–credited for introducing modern taiko to the United States.

After the prefatory material and introduction, The Way of Taiko is divided into three major sections which are then followed by the glossary and other resources for reference. The first part, “A Brief History of Taiko” is just that–a concise survey of the history of taiko drums and music from their mythological beginnings to their modern styles of performance. Notably, Varian addresses the place taiko holds in America as well as in Japan. The second section of The Way of Taiko, “Understanding Sounds and Movements,” takes a closer look at the drums themselves as well as other instruments and vocalizations used in taiko performance. Also explained in this section are some of the more visual elements of taiko, such as the players’ attire and movements. The main text of The Way of Taiko closes with “Training in the Way,” focusing on four major aspects of learning taiko: kokoro (spirit), waza (action), karada (body), and rei (etiquette).

For the most part, although updated and revised, the content of the second edition of The Way of Taiko is nearly identical to that of the first. What really makes the second edition stand out from the original printing is the increased values of production quality. The binding is much better and the colors are much sharper and more vibrant. Since the entire volume is in full-color, this really adds to the overall presentation of The Way of Taiko. The improved color is particularly welcomed for the dozens of photographs that are included in the volume exhibiting the power, dynamism, intensity, and beauty of taiko. Seiichi Tanaka’s San Francisco Taiko Dojo is predominantly represented in the photographs (Varian was associated with that dojo and it is the oldest taiko dojo in the United States), but other groups and soloists from both America and Japan are also featured. It is wonderful to be able to see the joy and spirit that the performers put into their art.

The Way of Taiko is a small but informative volume and very approachable, suited for those with a general interest in taiko as well as for those who are more actively involved in the art form. As a taiko player myself, I enjoyed learning more about its history, meaning, and form from a performance perspective. My dojo has a slightly different style and lineage than most of the groups discussed in The Way of Taiko, but I still found the book to be a very valuable resource. What will probably vary the most from school to school is the level of formality and the etiquette followed, but Varian describes the most proper forms so following her guidelines will aid in avoiding offense in most situations. What I probably appreciated most about The Way of Taiko was how many different aspects of taiko Varian addresses: its history and its future, its art and its science, and taiko’s total incorporation of mind, body, and spirit. The Way of Taiko is an excellent resource and I am very happy to see it back in print again.