Given Volume 1 by Natsuki Kizu

Even before I read this manga, I remember scrolling past something on twitter and seeing the cover. Who is the mildly cranky guitarist? What’s up with the diffident dude with the red guitar? Has there been yaoi manga translated here featuring a rock band since Gravitation? I have no idea, but I was more than ready to check out this series.

Uneoyama is a cranky high school student and guitar player who is quite irked to see another boy passed out holding a guitar in his favorite sleeping spot. Uneoyama is perturbed that the guy is clutching a Gibson with rusted out strings, but the mysterious boy says “Can this be fixed?” with a look of desperation on his face. Uneoyama quickly tunes the guitar, strums a cord, and is promptly asked for guitar lessons. Uneoyama isn’t sure how to teach an absolute novice the guitar, but his newfound companion tags along to band practice and introduces himself as Mafuyu Sato. Mafuyu meets bassist Haruki and drummer Kaji, and continues to be relentless about asking Uneoyama for guitar lessons. 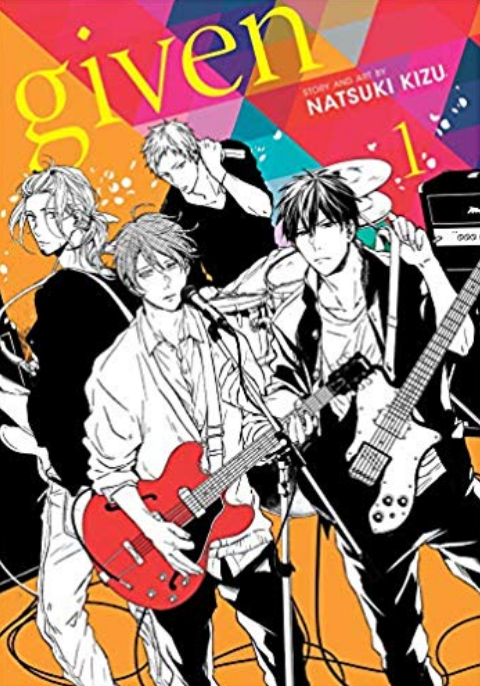 Throughout most of this first volume, Mafuyu is presented as an innocent enigma, but as Uneo gets to know him he begins to discover that Mafuyu’s emotional attachment to the Gibson he can’t play is rooted in a tragic event from his past. Uneoyama’s jaded attitude towards music is gradually changed by Mafuyu’s enthusiasm and he begins to think about his mysterious new friend more and more. Given perfectly executes the “I’m mad at you because you are so pretty” trope that is so enjoyable when done well. The scenes of the band playing music are dynamic, and Uneoyama’s growing feelings are built up in a subtle way even though he’s not yet ready to be honest with himself. Haruki and Kaji also have some cute scenes together, and as older band members spend a bit of time being amused at Uneoyama actually feeling off-kilter due to the fact that he is finally emotionally invested in something. Kizu’s character designs are all distinct and stylish, and I enjoyed the bonus illustrations of all the major characters that showed sketches of facial expressions as well as vital statistics. This was an extremely promising first volume, and I’m expecting this series will continue to entertain with a winning combination of slow burn romance and music.