I have no idea why Natsuki Takaya’s Twinkle Stars (aka Hoshi wa Utau) has yet to be licensed in the US, but when I learned that English editions were available in Singapore/Australia, I knew I had to acquire them. See the final paragraph of this post for a link where you might do the same.

I thought I might be disappointed by this series. There’s no shortage of complaining Takaya fans online, after all, and it’s not like her other series Tsubasa: Those With Wings or Phantom Dream really knocked my socks off, though I did come to like the latter by the end. After having read these two volumes, however, I am left to conclude that the chief complaint of unhappy fans is that Twinkle Stars is nothing like Fruits Basket. But why should it be? It’s a completely different kind of story, but that doesn’t mean it isn’t good!

Sakuya Shiina is a heroine in the mold of Tohru Honda, in that she has a difficult family situation but tries to keep up a cheerful front and doesn’t talk about her own problems very much. Her father contracted her cousin, Kanade, to be her guardian, though it’s unclear whether Sakuya knows that, since she seems to regard Kanade as a kind of savior (and often defends him against allegations of laziness). We don’t learn too much about Kanade, but it seems that he originally kept his distance from Sakuya, but has lately become very fond of her. As the story begins, he has actually remembered her birthday and offered to cook Sakuya’s favorites for dinner.

When Sakuya gets home from her part-time job that evening, she finds that Kanade is not alone. A young man named Chihiro is with him, and Sakuya simply assumes he’s one of Kanade’s friends. He gives her a present and tells her she’s amazing for always smiling and never giving up. Attracted to his lonely mien, Sakuya wants to meet him again, but discovers the next morning that Kanade didn’t actually know Chihiro at all! He spotted him loitering around outside with a gift box and assumed he was there for the festivities.

Sakuya becomes determined to find Chihiro and enlists the help of her two best friends, Hijiri Honjō and Yūri Murakami, who are also members of the stargazing club Sakuya has started. One of Natsuki Takaya’s strengths is in creating terrific friends for her heroine, and Hijiri and Yūri are both interesting characters in their own right. Yūri is pretty straightforward—a short but athletic fellow who is brave, forthright, and easily flustered—but Hijiri is a lot more complex, one of those refined-looking girls who loves to say things that rile other people but who is fiercely protective of Sakuya, even though she seems to adore her friend largely because of her ineptitude in various areas and doesn’t intervene to spare her embarrassment. I think I could easily read a spin-off all about Hijiri, especially since we’ve already gotten a couple of hints that she’s got secrets.

Eventually, Sakuya runs into Chihiro. She’s convinced he’s not a bad person and just wants to hear his reasons for what he did so as to understand, but he’s not cooperative. “I don’t want to tell you anything,” he says, and seems willing to concoct some fantasy persona for himself but not reveal the reality of his life. He disappears after telling Sakuya he hates her, and only then does she realize that she’s fallen in love with him.

At this point it becomes apparent that this will probably be one of those stories (like We Were There or Kare Kano) where the heroine will help heal the hero’s pain and angst. Because this is a shoujo manga Chihiro soon transfers into Sakuya’s school, and though he is initially cold and remote, he very slowly begins to warm up to Sakuya. Another thing Takaya is good at is leaving little clues about important events, and we get a couple of glimpses of Chihiro’s past that inform his behavior toward Sakuya. Primarily, she’s so vulnerable and pathetic that it moves him to protect her, and this sort of unpredictable impulse scares him.

It’s not that he actually hates her, but that he’s uncomfortable and unsure around her. This point is proven when Sakuya speaks before a group of students in an attempt to recruit new members for the stargazing club. She flounders so badly that Chihiro, spurred by the memory of another girl in a similar situation, rushes to her side to reassure her. Although he initially comes across as an irritating jerk, by the end of the second volume it’s clear that he’s mostly just awkward, and perhaps a little broken, too. Sakuya continues to be confused by his behavior, but the lingering sadness in his eyes convinces her not to give up.

The quality of the Chuang Yi edition is quite good. Physically, the paper quality is lovely, the images are crisp and clean, and the volumes come with dust jackets. The translation has a British flair, tickling me by including words like “wonky” and “vexing.” Takaya’s art looks great, but also makes for a kind of bizarre reading experience. The characters are so obviously drawn by her that they look and feel incredibly familiar, and yet they are not copies of anyone in either design or personality. Take, for example, this panel of Sakuya and Chihiro. 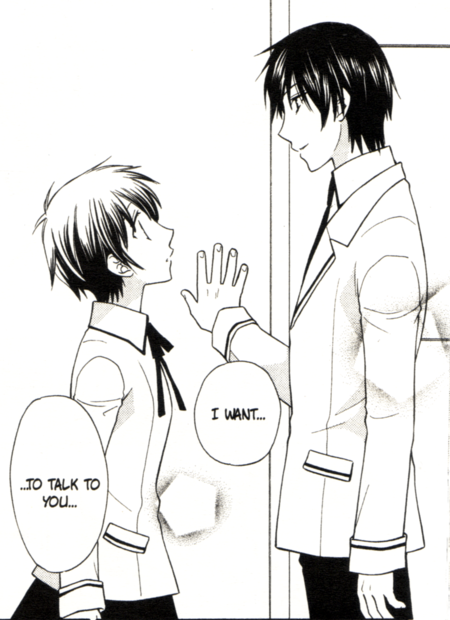 There’s no doubt who drew that. And they look slightly reminiscent of other characters, but one would never get them confused. It’s almost like we’re seeing some denizens of the Fruits Basket world to whom we were simply never introduced before.

Contrary to expectations, I enjoyed Twinkle Stars a lot. True, it’s not epic on the level of Fruits Basket, but again, that’s okay by me. I certainly don’t expect Takaya to keep writing the same sorts of things over and over, and I’m really looking forward to seeing what she achieves with this different kind of tale.

Twinkle Stars is not currently licensed in North America. These English editions were published by Chuang Yi Publishing in Singapore and distributed by Madman Entertainment out of Australia. They are available for purchase here, but shipping is quite expensive. I’ll be switching to the French editions from volume three onwards. The series is complete in Japan with eleven volumes.