After the first volume, as I do with most series I follow, Tomo-chan Is a Girl! moved to Bookshelf Briefs. But sometimes you have things to say that cannot be condensed into 150 words, and this volume is a very good example – it’s almost the perfect Tomo-chan volume. We resolve Carol and Misaki’s romance, and given Carol possibly the best material she’s ever gotten, as Misuzu’s attempts to “break” her work all too well. The marathon chapter is one big long take on the Japanese saying “idiots don’t catch colds”, which Tomo proves wrong, to everyone’s shock and horror. And we get two chapter’s worth of flashbacks, showing how we got to the present setup – Tomo and Jun’s middle-school years, Jun’s own realization of his feelings, and possibly the most disastrous couple in the history of manga. If you love this manga series, this may be the pinnacle – there’s two more volumes after this, but it’s hard not to argue that this is the high point. 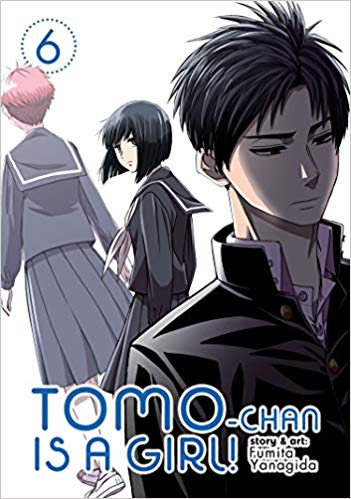 Carol has sort of been the breakout star of Tomo-chan, and her default reaction is, of course, smiles and good cheer. Now we, as the reader, and also Misuzu, have seen that cheer fall sometimes – notably when thugs were threatening Misuzu and she tried to protect Carol by saying they weren’t friends. But Misaki doesn’t see this, partly as Carol will never deliberately show that side to him, and partly as he’s scared to look further for fear there’s nothing behind her smile. Now, arguably Misuzu’s action here are appalling – something she realizes immediately. But they do work, and we get, as Tomo says, a wonderful few pages that show us that Carol can have real human emotions as well. (I was also amused at Carol’s mother cutting her off before she can go in for a kiss – given Ferris had Carol when she was thirteen, you can see why she’s going to step in. That said, given the omake chapter at the end, Ferris has little to worry about on Misaki’s end.)

I will admit that the two flashback chapters do run on a very old and creaking cliche, which is that Jun does not realize, for years, that Tomo was a girl, despite seeing her literally using the girls’ bathrooms at events. It always makes the main lead feel a bit too stupid, and it does here as well. But what follows is all too real and familiar, as Jun cuts himself off from Tomo after he doesn’t know how to be around her, and she too is hurt and retreats. Jun then realizes he needs to make an effort here, and does so… in a bizarre way. The brief, a few days relationship between Jun and Misuzu feels so wrong you want to scream, and both of them know it. Despite that, I loved that even though they knew that, both acknowledged that dating another person, having those feelings, felt good.

So we now have all the backstory, all we need to do is get Tomo and Jun on the same page and confessing. This has taken 6 volumes and we’re still not there yet, but the good news is that the end is in sight. Till then, Tomo-chan Is a Girl! is one of the best 4-komas I’ve read in some time. Funny and sweet.

When you’re doing a 4-koma series based around a very simple premise, it takes a lot of care to make sure that the audience comes back on a daily basis to see what happens next. The characters have to be interesting but not annoying, and the premise has to amuse but not bore. Tomo-chan Is a Girl! does a pretty good job of this. In Japan it’s helped by being released daily on a website, one comic at a time, much like a Western comic strip. Here, however, we read it in volumes, so the bar to clear is a bit higher. Especially when three of the four main characters are, for lack of a better word, dense in some degree or another. If you’re reading the series and thinking “man, I hope that they figure things out and get together soon”, I would drop it right now if I were you. Payoff will eventually come, but the whole point of series like these is a long, slow burn based around comedy and frustration. 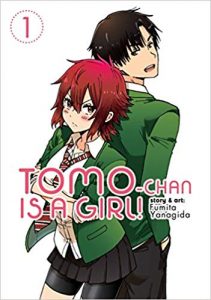 Tomo is the titular heroine. She grew up as a tomboy, learning karate at her father’s dojo and hanging out with her best friend Jun. Now they’re in high school, and Tomo has grown tall and busty, but is still very much the rough tomboy sort. This is a problem, as she’s in love with Jun, but he just sees her as one of the guys! Can she make it clear that she likes him the way a girl likes a boy? And if she ever did this, would she even notice, as it rapidly becomes clear that she’s just as bad at noticing the obvious when it comes to matters of love. Indeed, Jun’s obliviousness may be played up to hide his real embarrassment over the whole thing. Added to this mix are Misuzu, Tomo’s best friend who is there to offer jibes and support, in that order, and Carol, an exchange student who may be flightier than the rest of the cast, and is definitely bustier. Will anyone end up making their feelings clear?

Not so far, but I’m enjoying the journey. The first few chapters are rougher and a bit less fun, and it’s very clear that Jun is not playing things up, something that rapidly changes as the book goes on and the author realizes he can’t keep that going forever. Tomo is a likeable yet very fallible girl, who longs for reciprocated affection but wouldn’t know what to do with it if she had it. And I know, you’re shocked) Misuzu is my favorite character, as her dry retorts and “war” with Jun over who’s closest to Tomo ground the series a bit and also adds a new vein of humor. This is 7+ volumes in Japan, so I’m not sure it can quite keep up the pace, for reasons I mentioned above. But for now I’m amused by Tomo-chan Is a Girl!, and want to see how far the series can go with its (seemingly) dense leads.